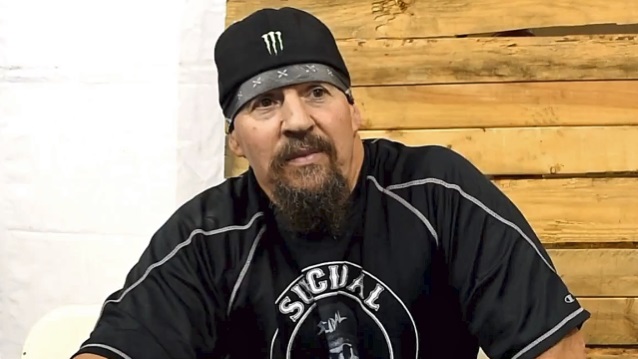 Brittney Patton of 103.7 The Eagle Rocks! conducted an interview with SUICIDAL TENDENCIES frontman Mike Muir at this year's edition of the Aftershock festival, which was held October 21-22 in Sacramento, California. You can now watch the chat below.

Asked if it's true that 2016's "World Gone Mad" may turn out to be SUICIDAL TENDENCIES' final studio album, Muir said: "You can't believe what anybody says nowadays — everybody's effin' lyin'.

"Basically, what I said is that we wanna do a record that if it was the last one, we'd feel good about it.

"Doing it as long as we have and just in life, the way it's going, you can't plan 10 years from now or whatever, because time just keeps ticking whether you move or not," he continued. "So we wanna do a record that we said we'd be very comfortable with. At the same time, we did a record — an EP — that originally we were gonna put out first [before 'World Gone Mad'] and then we said we may put it out afterwards. So we're actually gonna put that out. And we have something else that we're working on. And next year we're really excited about a lot of things that we really are looking forward to doing.

"We're not afraid to say no, but it is nice when you can say 'no' to things that you probably would have said 'yes' to before," he added. "I guess that's progress."

"World Gone Mad" was released in September 2016. The follow-up to 2013's "13" disc was SUICIDAL TENDENCIES' first to feature former SLAYER drummer Dave Lombardo and guitarist Jeff Pogan, who replaced Nico Santora in May 2016.

Muir told Finland's Kaaos TV this past summer that SUICIDAL TENDENCIES' upcoming EP would be "a little more specifically a statement of the time" and an effort that "could be interpreted as political."

In an interview with Metal Wani earlier this year, Lombardo said that he really hoped there would be more SUICIDAL TENDENCIES records. "I feel like that guy [Mike Muir] has a lot more creativity in him and a lot more energy than to throw in the towel," he said. "I feel Mike is on top of his game, and he's got a great band and great history with this band and I think that we should keep going, and I hope he does. And I'm not gonna stop asking him to record. I'm going to make sure that I keep bugging him: 'Man, we've gotta record. Let's do some recording. C'mon, let's record another album. Why not?' I try to motivate the musicians I'm with because there's no reason to stop. You've gotta keep recording, you've gotta keep creating. It's what we do for a living."