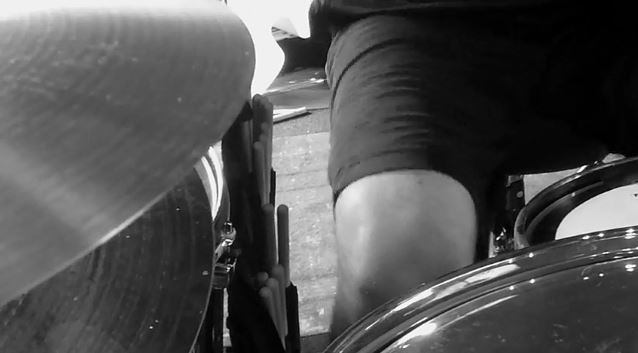 A short video clip of a drummer — believed to be Chris Adler (LAMB OF GOD) — laying down tracks for MEGADETH's new album has been posted on the band's official YouTube channel and can be seen below.

A photo that was taken on March 19 of MEGADETH mainman Dave Mustaine and Adler having a discussion at what appeared to be a fast-food restaurant or a coffee shop was posted on Twitter by former MY CHEMICAL ROMANCE drummer Bob Bryar.

As BLABBERMOUTH.NET exclusively reported on March 14, MEGADETH is rumored to have hired Adler and Brazilian guitarist Kiko Loureiro (ANGRA) to play on the band's new CD.

If true, Adler's involvement with MEGADETH would apparently be limited to studio work only, and he would not be expected to join the band on the road to promote the effort, which is currently being recorded in Nashville, Tennessee.

MEGADETH was still finalizing the recording lineup for its new album earlier in the month, with Mustaine tweeting on March 10 that he was "excited to be auditioning one of my final picks for my new guitarist today."