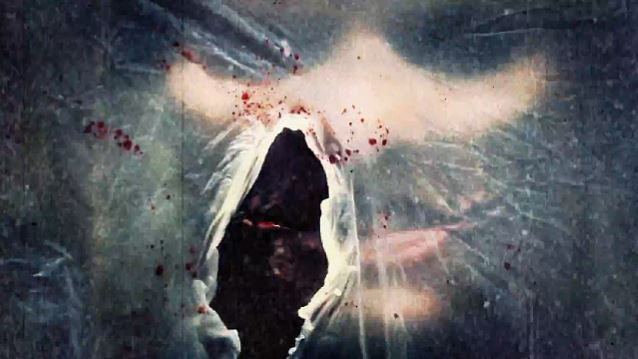 As with every album cycle, the members of SLIPKNOT are expected to unveil brand-new masks to coincide with the release of their fifth studio CD, ".5: The Gray Chapter", which will arrive on October 21 via Roadrunner. What appears to be the first glimpse (sort of) of SLIPKNOT singer Corey Taylor's new mask can be found in the just-released trailer for the band's "Prepare For Hell Tour". Check it out below.

Prior to the release of SLIPKNOT's last studio album, 2008's "All Hope Is Gone", SLIPKNOT revealed their new onstage outfits which were described at the time as "creepier" and "more intricate" than ever, with one mask reminiscent of that worn by horror film character Hannibal Lector. Some of SLIPKNOT's "All Hope" masks were markedly different from their previous versions, while others changed only a little.

".5: The Gray Chapter" features 14 tracks for the record plus two bonus cuts, including "Sarcastrophe", "Killpop", "The One Who Kills The Least", "Be Prepared For Hell", "Nomadic", "Lech" and more.

The title seems to be a reference to bassist Paul Gray, who died in May 2010. The new disc is the band's first since his death.

Yet to be revealed is the identity of the band's new drummer although reports have suggested that SLIPKNOT has recruited Jay Weinberg to play on the new album and tour. Weinberg is the son of Max Weinberg, longtime Bruce Springsteen and the E STREET BAND drummer. There are also rumors that SLIPKNOT is no longer working with Donnie Steele, the group's original guitar player who has been playing bass for SLIPKNOT since the band resumed touring in 2011.

The second edition of SLIPKNOT's Knotfest event will take place on October 24-26 in San Bernardino, California. More than two dozen acts will join the headliners, including FIVE FINGER DEATH PUNCH, VOLBEAT, OF MICE & MEN, IN THIS MOMENT, HELLYEAH, ATREYU and many others.

Support on SLIPKNOT's "Prepare For Hell Tour" will come from KORN and KING 810.