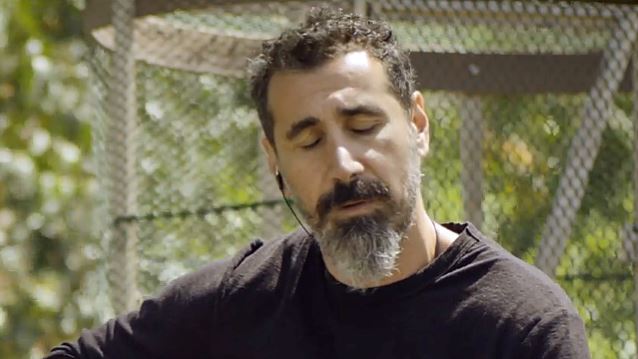 For years it's been rumored that singer Serj Tankian has been the sole holdout when it came to plans for SYSTEM OF A DOWN to make a new album. Although he's toured sporadically with the band since it ended its four-year hiatus in 2010, there have been no signs of the quartet getting back into the studio for the first time in over a decade.

But speaking with Rolling Stone, Tankian was asked about the status of SYSTEM and replied: "We're communicating and trying to see if we can bring our material together. There's definitely a lot of communication going on, a lot of back and forth. I can't make a statement in terms of whether we're going to have a record or not, because we haven't gone into the studio and done it. But there's definitely communication going on, songs being played to each other and all that stuff, so it's good. We'll see what happens."

Tankian added: "I think it would be great to create something brand new in a new direction. It would be very exciting, but everyone's got to be on board, on the same page, and it's got to be done in a way so that everyone is happy. If we can do that, we'll do it."

The singer also hinted that he had recently written several new rock songs, but wasn't sure where they would end up. He told The Pulse Of Radio a while back that he has always preferred to work on new music alone. "Even with SYSTEM, I always wrote the songs by myself in my own studio," he said. "I would write the songs, and have the vocals, have the whole arrangement done, then I'd take it to the band. But I'd still work the song from its inception to full form by myself. This is something I'd been doing for a very long time."
Tankian has released a number of solo projects in the past nine years, including four albums on his own, one with the jazz ensemble "Jazz-Iz-Christ" and three soundtracks.

SYSTEM OF A DOWN's last studio album, "Hypnotize", came out in November 2005. The group last toured in early 2015 to commemorate the 100th anniversary of the Armenian Genocide.

Tankian has just posted a new song online called "Artsakh", which he wrote in support of Armenian freedom fighters in Nagorno-Karabakh, a region in the former Soviet Republic of Azerbaijan near Armenia.