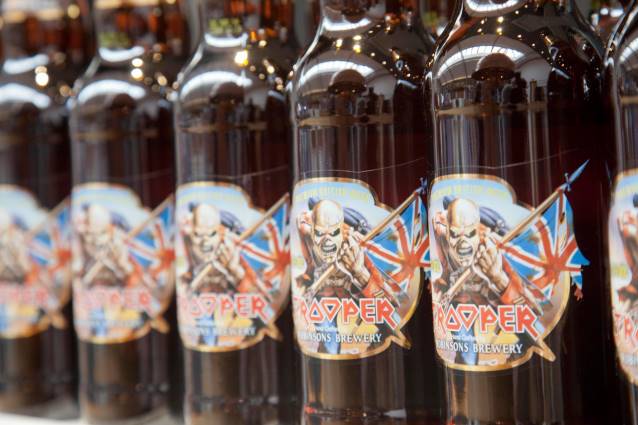 Robinsons Brewery today announced that over one million pints of IRON MAIDEN's Trooper beer have already been exported around the world. Given that the beer was only launched in the U.K. five months ago on May 9, and only made available to the USA and most other countries less than two months ago, this is a remarkable accomplishment for the Cheshire family brewers and takes the total number of Trooper pints sold globally to over 2 million pints.

Robinsons managing director (beer division) Oliver Robinson commented: "The beer itself is fantastic in terms of quality and taste, hence repeat purchases are high, but we are astonished to reach this second millionth mark in less than six months. To add to this, we have discovered that Trooper is driving the sales of cask ale across the board. Within our Robinsons estate beer sales of the pubs that have listed Trooper are actually 8% ahead of those which have not. This is a beer that not only drives customers into pubs; it also drives the sales of our other brands. There are not many beers in the world that can do that. Establishing a new beer in the U.K. and globally is a long and difficult process but we feel we are off to a great start”

At home, Trooper now has listings in many of the major pub chains, including Punch, Spirit, Coors and Wetherspoons as well as the major wholesalers. Heineken has elevated Trooper from a temporary seasonal listing to a permanent listing to the whole of the U.K. for free trade accounts. Abroad, expansion continues in Europe with Trooper the No. 2 best-selling ale in Sweden — fast chasing down Newcastle Brown Ale which is currently No. 1 there. Further afield the beer is just starting to impact across the continents after having secured all necessary licenses, permits and customs clearances which can be a lengthy process; New Zealand are preparing to take their first shipment, and Trooper has just landed in Canada for the first time. Brazil alone have ordered almost 84,000 pints since May, when the first two shipments to arrive there sold out immediately.

David Davies, managing director of Sovereign Beverage Company, and Robinsons' official export partners, claims Trooper is the most successful new beer ever launched from the U.K.: "We are the largest exporter of ales and cider from the U.K., with distribution of products in over 52 countries. In an eight-week period, distribution in 30 countries and over 1,000,000 bottles with some of the world's leading importers has made this product launch the most successful we have ever seen from the U.K. Trooper is simply a phenomenon!

"With the support of the globally renowned IRON MAIDEN, we look forward to longevity and building a really successful brand for the future in the world of export."

In the USA, Lanny Hoff, VP, brand development and marketing Artisanal Imports, Inc., commented, "Trooper is the most dynamic beer we have ever imported. Our distributors tell us it is outselling all of their other British beer, combined! Even more exciting, it is introducing many American beer drinkers to real, handcrafted, no-compromise British ale."

Ruth Evans MBE, CEO of Brewing, Food & Beverage Industry Suppliers' Association (BFBI), director of Brewing Technology Services Limited, and organizer of the oldest international brewing awards in the world, agrees that Trooper is providing a great profile for British beer all around the world: "It is great to see such a successful launch of a British beer with the internationally famous British band IRON MAIDEN into the export arena. With distribution into 30 countries in 8 weeks and over 1 million bottles sold overseas in the same period, we are confident that Trooper is the most successful launch of an English ale in recent years and will be sure to help raise the overall profile of British beers in export."

Trooper not only appeals to IRON MAIDEN's legendary loyal fan base, it is attracting new customers to the beer category who are now trying cask ale for the very first time. Keith Bott, SIBA chairman, believes Trooper is strengthening the British brewing industry in these times of austerity and is one to watch for future world beer competitions: "There's no doubt that a beer like Trooper with Robinsons is great for British beer exports generally. There have been 1 millions pints sold abroad to date and the way things are going this will multiply. Because the beer is directed at IRON MAIDEN fans worldwide it stands to reason that we have a fair proportion trying British beers for the first time and, if they like what they taste, then that can only be good for other British brewers. In recent years new world craft beers have done increasingly well in world beer competitions and this is the sort of beer that can fight back."