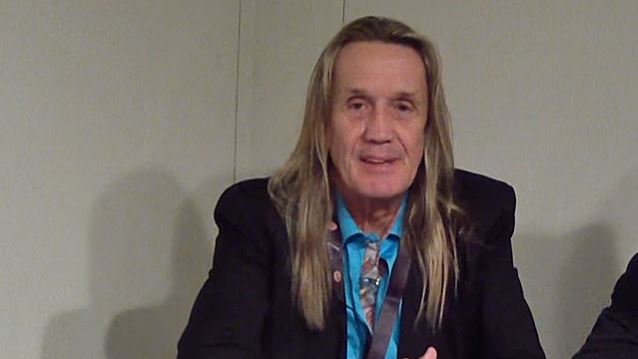 Madcap Music Review 's John Golden conducted an interview with IRON MAIDEN drummer Nicko McBrain at this year's NAMM show, which took place in January in Anaheim, California. You can watch the chat below.

Asked why he has steadfastly refused to incorporate a double-bass setup into his playing technique, McBrain said: "People like [Keith Moon]… Well, Mooney had two bass drums, but he very rarely played on that side. I don't think he ever had a pedal on it. [John] Bonham… Ringo [Starr]… When I was growing up, learning and being enticed into the music of that genre, that decade… Yeah, Ed Shaughnessy was a a double-bass [player], Louie Bellson, of course, and then the great Ginger Baker. But at that time, I was a CREAM fan, but I wasn't a fan of Ginger's. It was weird. It's only later in life [that] I realized how really good Ginger Baker is… And then, of course, Cozy Powell came along a little later, and Tommy Aldridge, and in the late '70s, you'd see more of these double-bass-drum players. But I kind of grew up and learned with one, and I found it hard enough… I mean, I've always said the analogy, it's bad enough trying to use one pedal. Why compound it with two? But, in fact, it's the reverse: when you have two pedals, certain patterns are easier."

He continued: "I don't know… It's just… Why change it? You know, in late '75, when I joined Pat Travers, he asked me to use a big drum set; he wanted me to play a double-bass drum kit. I said, 'I will get a big kit, but I'm not playing two bass drums.'

"I see these guys like Dave Lombardo [SLAYER], and then you look at people like Thomas Lang; he's phenomenal. Aquiles Priester [ANGRA, PRIMAL FEAR]… you know, these wonderful double-bass players. I couldn't get into that. I mean, I would if I sat down probably for a year or two and practiced every day for eleven hours."

McBrain added: "Horse for courses. Whatever rocks your boat."

McBrain recently rejoined the Sonor family after many yeas with Premier. He is currently playing his new SQ2 setup.

Sonor told U.K.'s Rhythm magazine: “The designers in MAIDEN's camp came up with a special 'The Book Of Souls' artwork that features the band's icon Eddie in different outfits, going around the shell. Only the bass drum and snare drum feature a slightly different design — the bass drum comes with Mayan symbols, the snare drum has the 'The Book Of Souls' album name written on it. But that's not enough. The entire kit is assembled with 24-karat gold plated hardware, as well as all hardware stands, a one-off and custom made for the band only."

In a letter to the Sonor production staff, Nicko said: "Amazing, wonderful, imaginative and most of all a B-E-A-utiful drum set. I cannot express how proud I am for you all. This drum set sounds as good as it looks and it looks a million dollars. The workmanship and love that has gone into the production of these tubs is without a doubt the Sonor legacy. I'm am proud and honored to be back with the family that I should never have left but am humbled to be back."