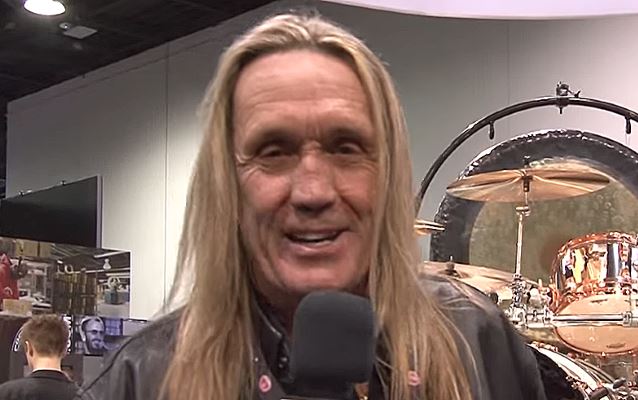 In a newly published interview with Music Radar, IRON MAIDEN drummer Nicko McBrain was asked why he thinks his band continues to flourish today while many other metal acts have come and gone. He responded: "It's the quality of the musicians. They're all amazing and I am so honored to be along for this ride, that I am the chosen one for the drum stool. They are all virtuosos. The songwriting on this new album ['The Book Of Souls'] especially is off the charts."

He continued: "The guys step it up every album. We have that passion for playing and being together as a band; that's where we live and breathe and what we have in our hearts. The drive and ambition has never changed. That is the winning formula. We have worked very hard and the morals and principles haven't changed from Day One.

Nicko added: "We also have [producer] Kevin [Shirley] who is the seventh member of the band, and then we have [managers] Rod Smallwood and Andy Taylor. Without them, I don't think we would be where we are. It's a team effort. We care about what we do. We do it for us; it's very selfish. We do it for ourselves and think the fans will like it, and if they don't, too frigging bad! It sounds callous and we do think of the fans, but we do it for us."

The 63-year-old McBrain also talked about how long he thinks he can go on for, playing this kind of intense and energetic music. He said: "We had such a great time on this record. I'm not a granddad, but I'm that age where people wonder how long I can keep going. If we're going to make music like 'The Book Of Souls', who knows? As long as we have our health and we can still get up and do it, then we will. We won't ever become a parody of ourselves. If we can't rock out and play 'The Number Of The Beast', 'Run To The Hills' and the new stuff, then what's the point?"

IRON MAIDEN's world tour, in support of "The Book Of Souls", kicked off on February 24 in Sunrise, Florida (a suburb of Fort Lauderdale).