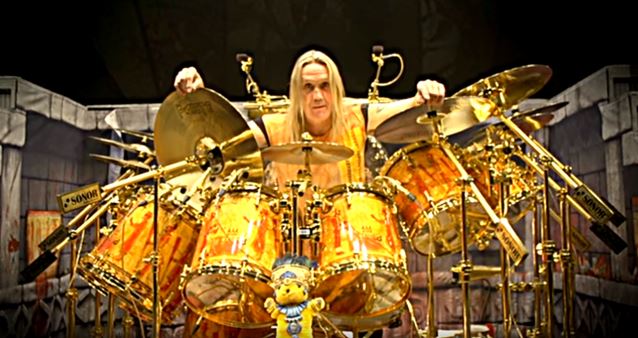 British heavy metal legends IRON MAIDEN have a released a new one-and-a-half-minute video clip in which drummer Nicko McBrain shows off his drum kit for the band's "The Book Of Souls" world tour. Check it out below.

In a recent interview with Metal Shock Finland, McBrain stated about his return to Sonor drums: "I left [Sonor] in '92 and went with Premier, and, unfortunately, business-wise, things didn't work out for the brand, Premier, and I was basically left without a drum company in the middle of last year. So my first thought was, 'I've gotta speak to Karl-Heinz Menzel at Sonor and see if they'll take me back.' Because I've now kind of got my hat in my hand, going out begging, you know. So I called Karl and I told him what had happened. And he said, 'Look, we'd love to have a meeting with you.' And I went over in September. I flew over to Europe. My manager, Andy Taylor, and I, we went over and spent the night there in Bad Berleburg [Germany] and we just talked… And the weirdest thing about it, or the greatest thing about it, was that it was as though I'd never been away. And we're talking over two decades. And we sat down and Karl said, 'What do you want?' I said, 'Exactly what I had twenty-two years ago: same sizes, same wood.' But there's something very, very special that they've done for me on this drum kit, which I can't really tell you about, because… Well, it's gonna be revealed at the first show, and it's an absolutely splendid, spectacular drum set. I think it's probably gonna top the 'Somewhere In Time' kit, which was made… And that's thirty years ago that Karl actually made that drum set for me; he, basically, had hands on building that drum set. So it was wonderful. So I'm really blessed to be able to feel this bond I still have with the brand. And I'm back. And I'm very happy. Very, very happy."

Asked how his iconic single-bass-pedal set-up and style developed down the years, Nicko told Music Radar: "Primarily that developed from the different bass players I've played with. It was never a thing of mine to see how quick I could get with one pedal. I wasn't ever a double-bass drum person. When I was growing up, the only double-bass drum players were people like Louie Bellson, Ed Shaughnessy and people like that. Then in the '60s, it was Cozy Powell and Ginger Baker. We didn't have many fired-up double bass drum players. There wasn't the massively fast thing going on like we hear today. These guys today are amazing. People like [Mike] Mangini, what's he doing?!"

He continued: "For me, my technique developed from locking in with great bass players. My style took that route, playing with the bass player instead of playing '2' and '4'. I did a lot of embellishments and my drumming was more percussive in the early days. I played in three-pieces a lot like with Pat Travers. In that three-piece, you have to fill in the gaps; you can't just sit on a groove because it needs that percussive feel like Ginger played with CREAM."