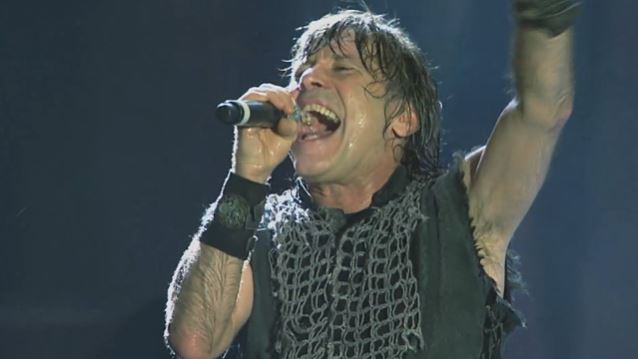 IRON MAIDEN's "Maiden England" 2013 world tour came to a spectacular end two nights ago in Santiago, Chile, with a return to the Estadio Nacional, playing to 60,105 fans, "the largest audience by a British band ever" (La Tercera newspaper). This is quite ironic considering MAIDEN was banned by the church from playing in Chile in 1992, yet has played there four times in the past six years alone, and, of course, recorded the live DVD "En Vivo!" at the Estadio Nacional in 2011.

IRON MAIDEN tour production manager Patrick Ledwith has checked in with these details from his 2013 tour logbook:

Footage of IRON MAIDEN performing the song "Run To The Hills" in front of 90,000 Brazilian fans at the Rock In Rio festival can be seen below.

During a brand new interview with Chile's Radio Futuro, IRON MAIDEN guitarist Dave Murray was asked if there are any plans for the band to return to the studio to begin work on material for the follow-up to 2010's "The Final Frontier".

IRON MAIDEN last month landed at position No. 1 on Billboard.com's "Hot Tours" list of top-grossing tours with $8.5 million in ticket sales from six performances on their summer tour of Europe. The shows were attended by a total of 121,280 fans, including a two-night, sold-out stand on August 3-4 at the O2 Arena in Lonon, England, where the band played to 27,000 fans. With totals added from this summer's Europe dates, overall ticket sales from the tour top $42 million from 45 reported concerts.