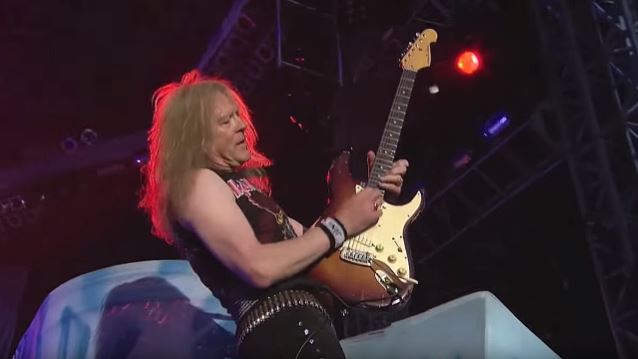 IRON MAIDEN guitarist Janick Gers has told China's East Day that he didn't become a musician to make money, to be a mainstream success or be a star. "I didn't really have a goal to win a Grammy," he explained. "That's just a present people give you. It's nice to get them [the awards] but I am not in the business to get a Grammy, or to become somebody in the Rock And Roll Hall [Of Fame]. It doesn't interest me at all. But I do want to play good music and I do believe [in] it. I am pretty sure the rest of the guys [in MAIDEN] want the same thing." [Although IRON MAIDEN has been eligible for Rock And Roll Hall Of Fame induction since 2005, they have never been nominated.]

Gers's bandmate Adrian Smith, who grew up listening to DEEP PURPLE and other '70s rock bands, said that part of MAIDEN's appeal is that they take an old-school approach to writing and recording music, one that is not affected by new technology or the Internet.

"Nowadays music is made by computer," Adrian said. "The vocals are computerized, not very organic anymore. With the drum machine, computers and programed music, they are not actually playing. Then what's the magic in that? When kids come to see us, they think we are different.

"When we make the sound, we try to make a statement, something substantial. Fans buy the album, read the lyrics and they don't just download and skip it soon," he added."

IRON MAIDEN made its Chinese live debut on Sunday, and will play Shanghai on Tuesday.

According to the Polish IRON MAIDEN fan club SanktuariuM, MAIDEN did not alter "The Book Of Souls" setlist for the Beijing show, although several minor changes in the performance were made — presumably at the reqest of China's Ministry of Culture, which had to approve all of the band's lyrics prior to MAIDEN's Chinese dates being confirmed.