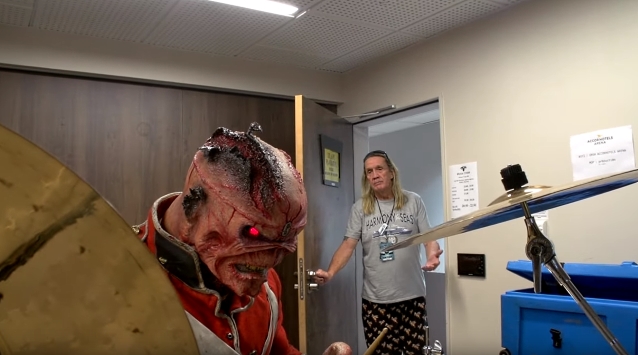 IRON MAIDEN has uploaded a lighthearted video of the band's mascot, Eddie, taking over drummer Nicko McBrain's "warm-up room" prior to last summer's MAIDEN concert at AccorHotels Arena in Paris, France. When McBrain enters the room and asks Eddie if he could have a few minutes on his drum kit to prepare for the show, Eddie shakes his head "no" and motions for Nicko to exit the room.

Eddie, whose full name is Eddie the Head or Edward The Head (also known as Edward The Great), is a perennial fixture in the often-violent MAIDEN album cover art, as well as ever present in the group's live shows.

MAIDEN's 2019 North, South and Central America tour comprises 44 shows in six countries, which, combined with the band's 2018 European dates, means that by the end of this tour, the group will have taken the "Legacy Of The Beast" show to over one and three quarter of a million fans around the globe.

The band's triumphant first leg of the "Legacy Of The Beast" tour opened in Europe last year to outstanding critical acclaim, not just by the 750,000-plus fans who came to see the show but right across national press and rock media, including The Times (U.K.) newspaper calling it "an extraordinary show filled with world class theatrics… a masterclass in performance and staging."

The concept for the "Legacy Of The Beast" tour was inspired by MAIDEN's mobile game and comic book of the same name and the stage set design featured a number of different but interlocking "worlds" with a setlist covering a large selection of 1980s material with a handful of surprises from later albums to add diversity.