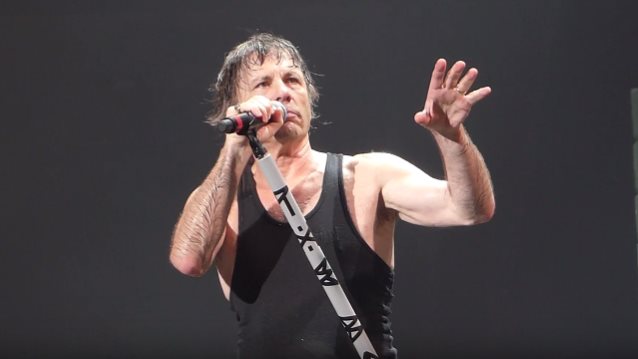 IRON MAIDEN frontman Bruce Dickinson says that he wants fans "to be surprised" by the setlist on the band's upcoming "Legacy Of The Beast" tour.

The European run of dates will kick off in Tallinn, Estonia on May 26 and finish at the O2 Arena, London on August 10.

The concept for the "Legacy Of The Beast" world tour was inspired by MAIDEN's mobile game and comic book of the same name and the stage set design will feature a number of different but interlocking "worlds" with a set list covering a large selection of '80s material with a handful of surprises from later albums to add diversity.

"When you do a show like we're planning to do, I want it to be really slick, but awesome," Dickinson told Kerrang! magazine. "I want people to go, 'Wow! Fucking hell, you've gotta see this show!' I want people to be surprised as well. I want them to go home going, 'Fucking hell, I can't believe they played that song!' That's the reaction I want.

"When you do an album tour, it's more… you can take time to be a bit goofy with people and for them to digest it and what have you," he continued. "On 'The Book Of Souls' tour, there was quite a lot of chatting with the audience. I'm not planning that on this tour because we've got so much to do and there's so much going on. The show and the music is gonna carry the whole bloody thing. I'm pretty intimately involved in the show. There'll be a couple of moments of chat with the audience, but it should be completely self-explanatory what's going on — the drama should be in the transitions of the stage and the music. And we're playing one or two things that people are gonna be really surprised by. There'll be social media madness after the first show."

Dickinson added that MAIDEN has "spent ages" planning the upcoming tour. "And I'm already walking through it in my mind and going, 'Where can I input those moments of meaning? To shift people's perceptions?' It's like 'Climb Like A Monkey' — where's that? That came from seeing someone at the front doing it, and it just became this massive thing! It's a laugh, why not?"

Dickinson told Sweden's "Nyhetsmorgon" program that MAIDEN is "playing, as a band, better than we were in the '80s, and the evidence is there — you can hear it in the live recordings and things. As an artist, you learn so much more about your craft, if you like — just your stage craft. And also the things you can do with your voice. So you do learn a lot more about things like that."

IRON MAIDEN bassist Steve Harris recently reiterated his stance that the band has absolutely no plans of retiring. Asked if he thought when he first formed MAIDEN more than four decades ago that the group would still be around this many years later, the bassist told SiriusXM: "No, not at all. I mean, you don't think that far in back then — you just think about the next album and the next tour. So that's how we've been carrying on, really. I've been asked that question so many times since 20 years ago: 'How long are you gonna carry on for?' I don't know. We'll carry on as long as we can. These days, I suppose, you've gotta look at everybody's health and there's things that might be out of our hands [that might determine] as to whether we carry on or not. But if we can physically carry on, we'll carry on [for a long time]."