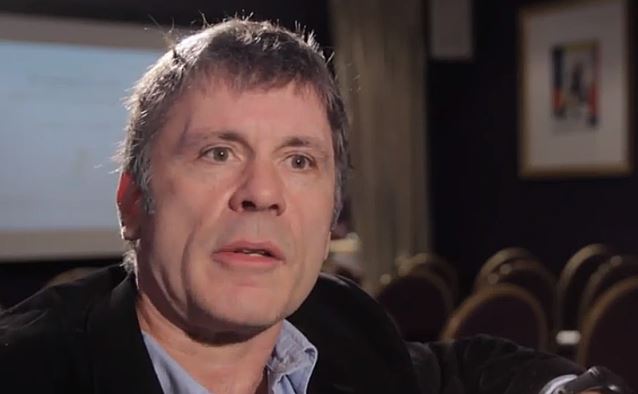 According to Belfast Telegraph, IRON MAIDEN singer Bruce Dickinson will announce the winner of the CAMRA (Campaign For Real Ale) award for the Champion Beer of Britain, which is selected at the Great British Beer Festival.

Dickinson will unveil the champion beer in London on Tuesday, August 12.

IRON MAIDEN's Trooper beer, which was launched in May 2013, will be on sale, among hundreds of others, at the annual event.

CAMRA chairman Colin Valentine said: "We are hugely proud to have Bruce Dickinson announcing the winner of the Champion Beer of Britain competition. He is a true real ale lover.

"The unique taste of Trooper has not only captured IRON MAIDEN's fan base, it is also attracting new customers to the beer category who are now trying real ale for the very first time."

The Trooper beer has sold more 5 million pints since its launch, with almost half of it brewed for the export market (Trooper is currently distributed in 40 countries).

"I don't drink mainstream standard lager," Dickinson told beer writer Pete Brown last year. "If I was thirsty in a pub with no real ale, I'd rather have a lime and soda. But anyway, we haven't positioned Trooper as a beer from a metal band — it's a brand of beer brewed by Robinsons that we've developed with them. They've had six generations of brewers there, they've got some highly respected beers, and what they don't want is a bunch of rock stars coming up and duffing up their reputation, because they're still going to be there in another two or three generations."

He added: "I'm a big Belgian beer fan as well. I love the Trappist beers — they have such a great tradition over there. Their beers are unique as well, like our real ales. I just hate bland beers. I can't stand Budweiser. They're the Great Satan, and they're trying to shut down one of my favourite Czech breweries. There's something I instinctively dislike about Budweiser. I won't have it in the dressing room when we're touring."