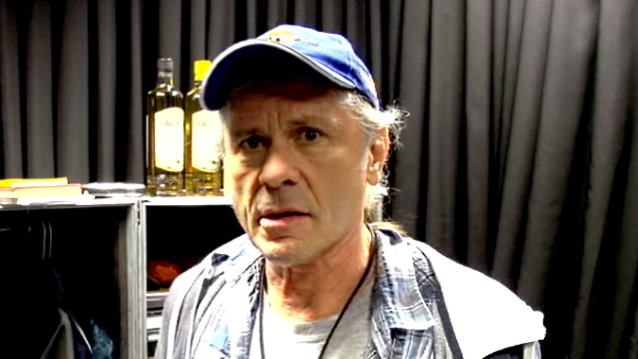 U.K.'s Daily Mail has uploaded several photos of IRON MAIDEN singer Bruce Dickinson with his new girlfriend. The pictures were taken earlier this week in Paris, France, where the couple share an apartment.

According to Daily Mail and The Sun, Dickinson's new girlfriend is "fitness teacher, journalist and fashion blogger" Leana Dolci, who is said to be 15 years his junior.

The 61-year-old rocker and his wife of nearly three decades, Paddy Bowden, reportedly separated in 2018.

In a recent interview with Argentina's Clarín, Bruce confirmed that he is residing in the French capital with his "girlfriend."

According to the Mirror, Bruce and his wife have no immediate plans for divorce.

Five years ago, Dickinson was diagnosed with stage 3 throat cancer after doctors discovered a golf ball-size tumor on his tongue and another in the lymph node on the right side of his neck.

Two years ago, Dickinson told BBC Radio 2 that he made a conscious decision to keep his family life — including current and former wives, divorces and children — out of "What Does This Button Do?" "There's no need for it, really," he said. "And I think there's a belief that that nastiness somehow sells books. And I'm not sure one, that it does, and two, that it's particularly the sort of book that I want to be a part of. So I made the decision that, in amongst not being horrid to people, 'cause there's no point, at the same time, I thought, well, I also don't want to tell confidences about other people's lives. If I wanna share a confidence about my life, 'cause it's my autobiography, fair enough, but dropping other people in it for the sake of, well, ratings, basically, I think is immoral."