IRON MAIDEN singer Bruce Dickinson signed copies of his recently released autobiography, "What Does This Button Do?", on Monday, November 5 at FNAC Champs Elysées in Paris, France. Video footage of his appearance can be seen below.

Asked about his decision to keep his family life — including current and former wives, divorces and children — out of his autobiography, Dickinson told BBC Radio 2: "Well, first of all, I don't read that many autobiographies. So one of the things, when they said, 'You wanna do it?' I went, 'Hmmm. Okay, let me have a look. Let me think to the last couple of autobiographies I read that I really enjoyed.' And you have to go back a long way to one called 'The Moon's A Balloon' by [British actor] David Niven, which was brilliant. What a great read! It was like a romp. It was like being in a pub with the guy, except you wouldn't be in a pub with David Niven; you'd be on a yacht, drinking champagne. But anyway, it was like being with him, telling you great stories. And the other one was George Melly 'Rum, Bum And Concertina', which was, again, a fantastically well-written, well-crafted series of stories. And I thought, 'What's the common theme there?' They're all really good stories, they're all uplifting books in their own right, and none of them are particularly nasty to other people. There's no need for it, really. And I think there's a belief that that nastiness somehow sells books. And I'm not sure one, that it does, and two, that it's particularly the sort of book that I want to be a part of. So I made the decision that, in amongst not being horrid to people, 'cause there's no point, at the same time, I thought, well, I also don't want to tell confidences about other people's lives. If I wanna share a confidence about my life, 'cause it's my autobiography, fair enough, but dropping other people in it for the sake of, well, ratings, basically, I think is immoral."

Dickinson, who turned 60 in August, has several other interests beyond music. He is a licensed commercial pilot and owns an aviation company. He has also done some acting and brewed beer. 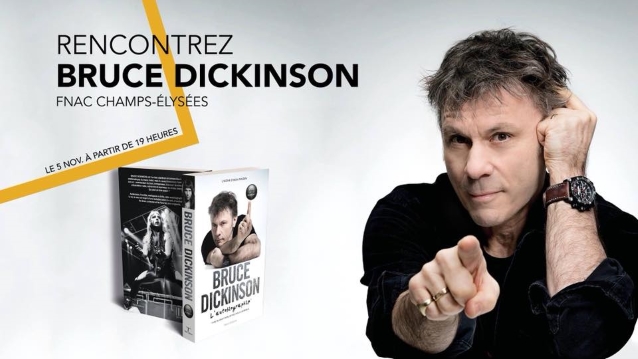