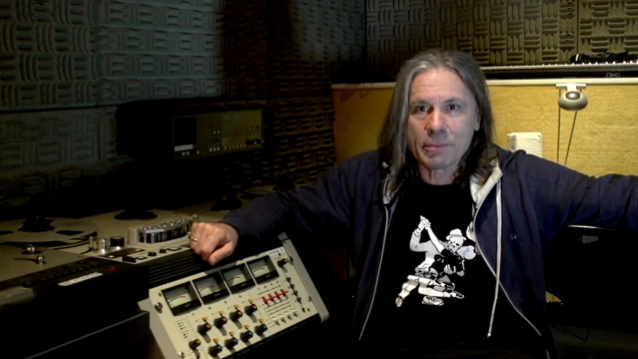 In a new interview with Full Metal Jackie's nationally syndicated radio show, IRON MAIDEN singer Bruce Dickinson spoke about how he and his bandmates managed to keep the details of their new album, "Senjutsu", under wraps for more than two years after completing it in early 2019 during a break in their "Legacy Of The Beast" tour. Asked how he avoided the temptation to revisit and potentially reconfigure songs while waiting for the record to be released, Bruce said (as transcribed by BLABBERMOUTH.NET): "Oh, we didn't have access to it — simple as that. None of us had a copy of the record because we knew we were gonna have to sit on the record for awhile and we were so paranoid about security and the Internet and people ripping it. As soon as you let the record be heard by anybody, you are at risk of of it leaking, you know? So, basically, apart from myself and Steve [Harris, MAIDEN bassist], nobody in the band heard it, 'cause they'd all gone home [after completing the recording sessions]. We mixed it, and I was in the studio when we finished the last track. And myself and Steve sat back and listened to the mix, and we listened to the mix again, and then that was it. And the next time I heard the album at all was, yeah, a couple of years later."

Asked if he had wanted to listen to "Senjutsu" at all during that time, Bruce said: "Yeah, of course, you're curious. [You're going], 'I'd just like to hear it,' but nobody had a copy — nobody. I mean, Steve, I think, had a copy and one copy locked on some secure laptop somewhere. And when he was mixing the live album 'Nights Of The Dead' that we put out, then I popped in while he was mixing it, and I said, 'Tell you what, while you're here, should we just spin up the album?' And he went, 'Yeah. Yeah. Go on.' And he'd only listened to it once since. So we put it out there, we [thought], 'You know what? This is pretty damn good.'

"I had a copy, kind of a low-res copy of [the first single] 'The Writing On The Wall' that they shipped over to me because as I was doing this storyboard [for the music video], I said, 'Okay, I know I wrote the words, I said, 'but I can't remember every single note of all the bits that went in the middle. I actually do need a copy of the damn song if we're gonna do a storyline or the storyboards for the video.' And they went, 'Oh, okay then. ' But yeah, we were really, really tight on security for that."

"Senjutsu" was released on September 3 via BMG. IRON MAIDEN's first LP in six years was recorded in Paris with longstanding producer Kevin Shirley and co-produced by Harris. It was preceded in July by a highly acclaimed animated video for "The Writing On The Wall" made by BlinkInk based on a concept by Dickinson with two former Pixar executives. It followed a month-long teaser campaign and global "treasure hunt" for clues about the track title and concept.

For "Senjutsu" — loosely translated as "tactics and strategy" — the band once again enlisted the services of Mark Wilkinson to create the spectacular Samurai themed cover artwork, based on an idea by Harris. With a running time of a little under 82 minutes, "Senjutsu", like their previous record "The Book Of Souls", is a double CD/triple vinyl album.