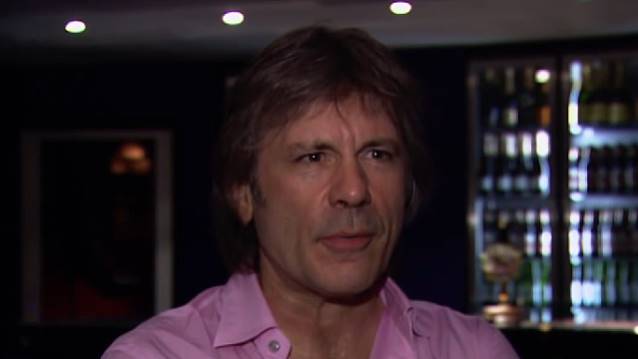 IRON MAIDEN frontman Bruce Dickinson has revealed that the band would consider opening an interactive museum at some point in the not-too-distant future. He told the Daily Star newspaper: "We've got loads of gear kicking around. I don’t want it to end up in some po-faced museum, with people in white suits saying, 'Don't touch this.'"

He continued: "I donated a jacket to the Rock And Roll Hall Of Fame and it was locked away in a glass cabinet miles away from your eyes.

"Eddie's not that sensitive," Dickinson laughed, referring to the band's skeletal mascot.

IRON MAIDEN completed a three-year world tour with a headlining appearance this past Saturday (July 5) at the U.K. edition of the Sonisphere festival, which was held at Knebworth Park in Hertfordshire.

"Tonight is the last night of a three-year tour; it's all been building to this," Dickinson told the crowd during the performance. "If we don't get it right tonight, then we never will." Dickinson also took time to thank the MAIDEN crew and team as well as the fans for "making it real," adding, "But what's coming in the next few years is going to make it more real for you guys, believe me," possibly hinting at a new studio album.