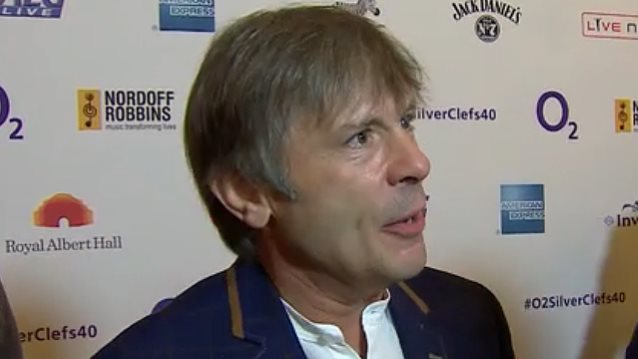 IRON MAIDEN frontman Bruce Dickinson has told the BBC he is on the mend after his treatment for tumors on his tongue.

The 56-year-old told entertainment correspondent Colin Paterson although his head had been "cooked," he was feeling ready to celebrate and expects to be singing again soon.

He was speaking earlier today (Friday, July 3) at the O2 Silver Clef Awards in London, where IRON MAIDEN picked up the award for outstanding contribution to music.

On the topic of what he has gone through in the past six months, Dickinson said: "Well, I've just been through what, actually, a load of people go through every day. I mean, 'cause it's thousands of people in the U.K. and around the world who have treatment for this kind of thing. So, in that respect, the only thing that's special about it is that I'm a quite well-known person, so… But I've been fortunate. I had a really good bounceback. And everybody says, 'Hey, it's gone.' So I'm just getting better now, really — healing up."

Asked how big the tumor was, Dickinson said: "I had two, actually. One was three and a half centimeters — the size of a golf ball. And the other one was two and a half centimeters, and getting a bit bigger. And that was the only symptom — I had a lump in my neck, and that was the second one. So I went to the doc, and they went, 'Oh, that's a bit weird.' [They] took a scan of it, had a look, had a poke around, and went, 'You have head and neck cancer.' So I went, 'That's a bit of a blow' But you get on with it. You crack on and you get on with it. So… that was it."

He continued: "Funnily enough, since I was treated for it, I've met half a dozen people my age who all had exactly the same type of tumor, the same location, all had similar treatments, and they varied in age from 40 to late 60s."

Asked how the treatment has affected his voice, Dickinson said: "Well, I mean, speaking voice-wise, everything is fine. I mean, the whole thing is still healing up, so, you can imagine, to get rid of that with radiation has given it… The inside of my head has been cooked, pretty effectively. So, you know, that will all take a while to heal up and it's coming back. But, I mean, I've got… I can sing, I can talk… I haven't gone out and done the equivalent of trying to run a hundred meters in the same way that I used to sing before. 'Cause let it all calm down. I only finished coming out of treatment two months ago, for God's sake, and the doctor said, 'It'll take a year for you to be better.' Well, we've beaten that by about six months so far, but I'm not gonna try and push things to prove a point. We've got loads of time."

You can watch video footage of Dickinson's chat with the BBC at BBC.com.

Due globally on September 4 through Parlophone Records (Sanctuary Copyrights/BMG in the U.S.), IRON MAIDEN's new album, "The Book Of Souls", was recorded in Paris, France with producer Kevin "Caveman" Shirley in late 2014, with the finishing touches added earlier this year. However, the band decided to delay its release so that Dickinson would have time to recuperate sufficiently to join in the preparations for the album's launch.

Asked by U.K.'s Kerrang! magazine if Dickinson's cancer diagnosis affected the recording of "The Book Of Souls", IRON MAIDEN bassist Steve Harris said: "Well, it didn't at all, because Bruce didn't know and none of us knew anything about… There was no inkling of any of it. He'd finished all his vocal bits completely anyway, and then there were some other bits and pieces we were doing. Really, we didn't know anything — he didn't show any signs at all. I mean, his singing, when you hear it… He's singing better than ever."