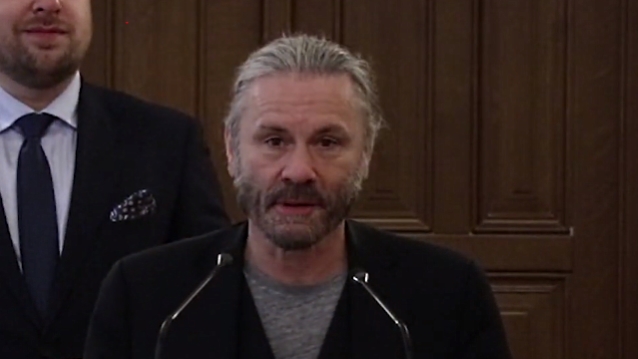 Bruce Dickinson was declared an honorary citizen in Sarajevo, Bosnia-Herzegovina on Saturday (April 6).

The IRON MAIDEN singer was presented the award for his visit during the city's wartime siege and the concert he performed with his solo band in December 1994.

The ceremony was part of the traditional celebration of the anniversary of the city's liberation in World War II. Each year authorities bestow individuals they view as having contributed to the city's development and promotion with this title.

Sarajevo Mayor Abdulah Skaka presented the award at city hall. He said that Dickinson's presence in Sarajevo in 1994 "was one of those moments when we in Sarajevo realized we will survive."

Dickinson accepted the award in person, saying that it is great that his visit 25 years ago "still means this much to people to give me this symbolic award."

"While this is a great honor, I think that this award belongs equally to the people of Sarajevo who are still here," he said.

The IRON MAIDEN frontman was recognized in a unanimous vote by Sarajevo City Council.

In its decision, the Council explained that Dickinson has, as a foreign citizen, contributed significantly to the development and affirmation of Sarajevo, as well as to the relations among people based on solidarity, democracy and human rights.

Dickinson and his band came to Sarajevo with the help of UN troops in 1994 and held a concert at the Bosnian Cultural Centre.

Two decades after, in 2016, he returned to the Bosnian capital to shoot the documentary "Scream For Me Sarajevo", directed by Tarik Hodzic.

The move to honor Dickinson was initiated by the association of artists Concept Media.

"Scream For Me Sarajevo" was released last June on DVD, Blu-ray and digital via Eagle Vision. In addition, the music from the film was issued on CD/double LP via BMG.

Saturday was Sarajevo Day, which marks the city's liberation during World War II and the 1992 start of the Bosnian Serb siege.