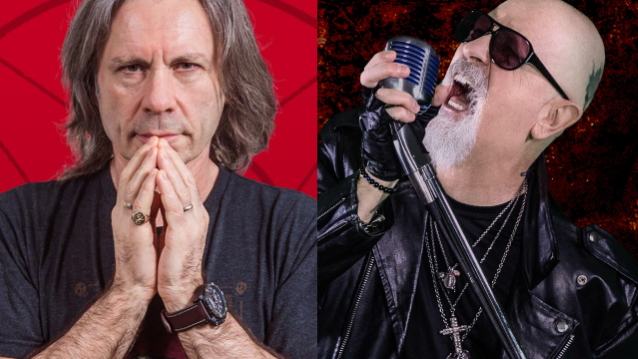 IRON MAIDEN's Bruce Dickinson has once again called out singers who use teleprompters during live performances.

A teleprompter, or autocue, is a display device that prompts the person speaking with an electronic visual text of a speech or script, and it is usually used by vocalists — including JUDAS PRIEST's Rob Halford and BLACK SABBATH's Ozzy Osbourne — who are getting on a bit and have a large body of work to remember.

Dickinson brought up the topic of singers relying on teleprompters during his spoken-word performance last night (Friday, March 6) at CinemaxX Hamburg-Dammtor in Hamburg, Germany.

Bruce's latest comments echo those he made back in 2014 in an interview with The Guardian. He said at the time: "I never realized that people were using autocues. What the fuck is that all about? People pay good money and you can't even remember the sodding words."

A few weeks after Dickinson's The Guardian interview was published, Halford was asked about the MAIDEN frontman's comments during a chat with Australia's AndrewHaug.com. Rob said: "Well, the first thing I'll say about that is Bruce Dickinson is a good mate of mine; I love him to death. I think he's an incredible singer, he's a great showman, he's in a wonderful band, IRON MAIDEN, who are one of the biggest metal bands in the world. And as far as what people say about each other, I don't think it really means that much, to be quite honest. We say whatever we say, depending on the day and the emotion that we're at. I know Bruce's heart is in the right place, and he just said what he said, and that's all there is to it to comment, in that respect."

In a 2010 interview with the QMI Agency, Halford spoke about how using a teleprompter helped him when he was asked to fill in for Ozzy with BLACK SABBATH for a show after Osbourne was taken ill. "[Like Ozzy], I use a teleprompter now too because I do so many things," he said. "I can't remember. I wish I was like my mate Bruce Dickinson and could do everything, but I need that safety blanket."

During the 2005 edition of Ozzfest, the traveling festival's founder, Ozzy's wife and manager Sharon Osbourne, famously cut the venue's public-address system and the main stage's power on at least three occasions during MAIDEN's performance at the tour's final stop in Devore, California because she said that Dickinson was "talking shit about my family, night after night," and was being "disrespectful" to her husband during Bruce's "nightly outbursts from the stage" by saying that "we don't need a teleprompter' [like Ozzy]."