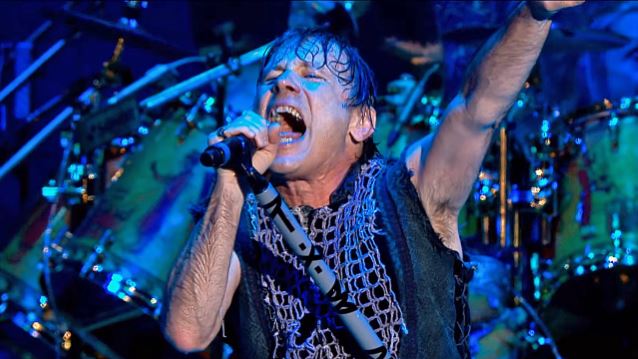 Unlke many of IRON MAIDEN's '80s rock peers who are playing a largely greatest-hits set on tour, a third of the British heavy metal band's set on the recently ended "The Book Of Souls" tour came from that album. Singer Bruce Dickinson explained to Fortune: "If you take advantage of them [fans], as in you serve up the same old thing every single tour, you can expect some of them to walk away. That is just a band becoming a karaoke band. If you're not doing new music, why bother? We don't share the idea that going and doing stadiums, playing thirty-year-old songs, is a success. It's just making money."

As for the fans who don't want IRON MAIDEN to play anything but the 1980s classics, Dickinson said: "That's tough. In that case, don't come."

IRON MAIDEN bassist Steve Harris told The Music last year that the songs from "The Book Of Souls" have been going down well live. "Yes, they are," he said. "It's like any new tour with new songs; you're not going to get the reaction that the old stuff gets. It's just always like that when you're playing new stuff. Maybe one day a couple of them songs will be regarded as a massive part of the set, once people know them more. But I think it's really important to push your new stuff; it keeps things fresh."

"The Book Of Souls" world tour kicked off in early 2016 and returned to North America this past summer. The band's Mayan-themed set saw Eddie, MAIDEN's omnipresent mascot, having his heart torn out of his chest by Dickinson, who threw the heart into the crowd.