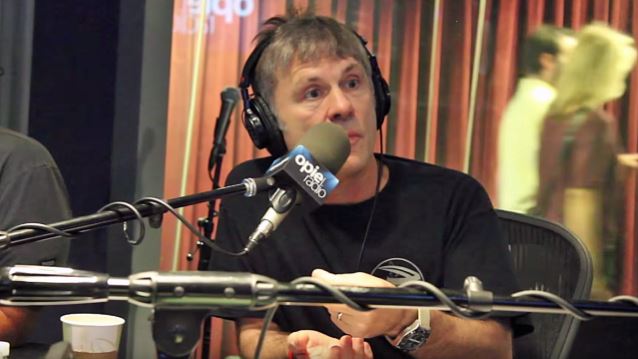 IRON MAIDEN singer Bruce Dickinson says that up-and-coming bands are "being completely stuffed" by the state of the record industry today because of a growing perception of music as a low-value — or no-value — product.

During an appearance on the August 31 edition of the "Opie Radio" talk show, Bruce was asked if he thinks recording artists are getting "ripped off" by music streaming services like Spotify. He responded: "Yeah, they are. But it's just like one of those, kind of, 'Damned if you do, damned if you don't' moments, really. I mean, it's this thing of… Kids love music, and people love music now more than probably any other time in human history, right? So what do you do? Do you say that people that love everything, 'You're all criminals, just 'cause you love it.' That's what sank all the record labels, who didn't figure out that, actually, these people are not trying to do harm. They just love it, you know?"

Bruce went on to say that streaming services like Spotify and Apple Music benefit established artists more than they do the aspiring ones who have yet to break through.

"What's sad, I think, is for the young bands coming up," he said. "'Cause, I mean, how are they gonna make a living? Because, basically, they are being completely stuffed by not so much illegal downloading, although, yeah, that kind of, obviously, goes on and all the rest of it. But the bar is now so low in terms of what value people place on people's creativity and music and stuff like that, and it's just getting driven down into the basement. So it's like the cult of celebrity — you know, those people who have no talent, except being famous and doing stupid stuff. That appears to be more important and have more value than people who have real talent."

Part of Dickinson's concern lies in the fact that two of his sons — Austin and Griffin — play in bands and are seeing firsthand how the public's increasing reliance on free streaming services has led musicians to struggle staying financially afloat in the music industry.

"My two boys [are] both doing their own thing and they both just got signed to record labels and stuff, and so they're going through the whole process right now," Bruce said. "And the deals that they're looking at… 'Cause, I mean, I go down the pub with my guys, and they sort of say, 'Dad, you wanna take a look at the contracts and see if we're getting ripped off?' And I said, 'Well, I don't really have much of a clue what I'm looking at here, but let me have a look.' [And then I went], 'That one looks a little dodgy to me. You might wanna ask them about that one.' For example, on one contract, there was this thing that said, 'Yeah, we'll give you X thousand advance' — and it's only an advance, so, I mean, it's not a huge amount. The money is, like, twenty percent of what it would have been fifteen years ago, so, for starters, all that is way back. Plus, they wanna be selling t-shirts for you, and they wanna be taking a slice… The record companies are taking a slice of everything. So, anyway, in this contract was one bit that says, 'And we will give you tour support.' Okay? And I went, 'Oh, okay. Well, that's okay. Tour support of X.' And then it said, 'Tour support will be payable after the tour, after you give us all the receipts.' And I'm, like, 'Eh, no.' [Laughs] 'So who's gonna front [the money]…? In other words, you're gonna pay all the money out of the money that you guys have got to live on, and then you've gotta try and claim it back off these schmucks? You've gotta be kidding me. You can't run a tour like that.'"

According to Dickinson, his son Austin has had a particularly hard time dealing with accusations of nepotism from online haters who have claimed that the young vocalist earned his record deal with the help of his father.

"[Austin is in a] band called AS LIONS, and they're just signing to Eleven Seven Records," Bruce explained. "In fact, my son's over here on Thursday, in New Jersey; he's recording the album over here. He's gonna be 25 on the 23rd of September. And Griff's [Griffin Dickinson] in a band called SHVPES [pronounced 'shapes'], and they're signed to Spinefarm."

He continued: "Austin was in a band called RISE TO REMAIN, and they got signed to EMI. And then they — as most bands do — they kind of imploded and they started something new. But that was… He had to take the full force of all the haters and all the trolls and all the Blabbermouth idiots and all the rest of it. They were, like, 'Oh, yeah, well, obviously, he just got the gig 'cause he really can't sing, and he's not as good as his dad.' And all that stuff. Oh, it's hard, it's harsh. But he bashed his way through it, and I'm really pleased for him."

IRON MAIDEN's new album, "The Book Of Souls", will be released on September 4 through BMG in the U.S.A. (Parlophone Records in the rest of world).