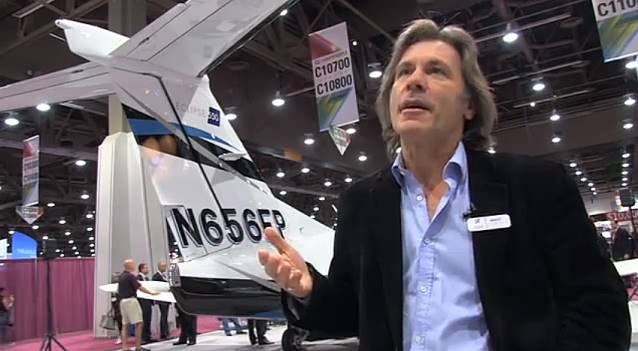 FlightGlobal conducted an interview with Cardiff Aviation Limited CEO and IRON MAIDEN frontman Bruce Dickinson at the 66th annual NBAA, the world's largest business aircraft show, which was held October 22-24 at the Las Vegas Convention Center. You can now watch the chat below.

Cardiff Aviation was launched in mid-2012 by Dickinson, who is himself a 7,000-hour Boeing 757 pilot, and Mario Fulgoni, a seasoned senior aviation manager and former airline captain. It has 132,000 square feet of hangar space capable of accommodating aircraft up to the size of a Boeing 767-300, and parking for up to 20 narrow bodied commercial airliners. St Athan has a 6,000 ft runway.

As well as maintenance of airliners and other large aircraft for several major and independent airlines, Cardiff Aviation has facilities to complete the full range of ancillary aircraft maintenance and training activities and has the expertise and approvals to certify aircraft from many jurisdictions.

Cardiff Aviation has considerable in-house expertise. However, joint ventures and partnerships — current and to be announced — all based under one roof at Cardiff Aviation's St Athan base, massively extend that resource and expertise offering into a vast array of markets.