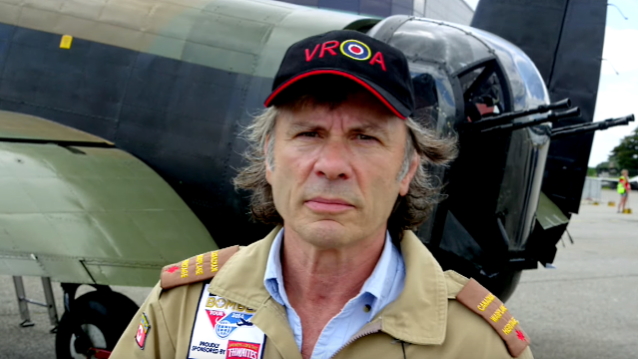 The museum invited Dickinson to its facility next to the Hamilton airport knowing that he is a massive aviation and history buff.

Ahead of MAIDEN's Toronto dates this weekend, the band has shared a new video of Dickinson's Lancaster flight, stating: "Here's what Bruce got up to last time we were in Toronto..."

Bruce told Wales Online in an interview that he still gets a thrill out of flying, but that it's a totally different sensation to playing live.

"The satisfaction flying airplanes is getting the job done, but the satisfaction with playing live is external, looking out at all the people looking at you," he said. "With an airliner, it's all internal. If you've got passengers, nobody goes, 'Wow! Wasn't that great?' They're thinking about the rest of their day. Your job as an airline pilot is to deliver them safely and be invisible. That's quite nice for me because it's completely the opposite to what I do when I sing."

Dickinson flew his band around the world in their plane dubbed Ed Force One, named after IRON MAIDEN's iconic mascot Eddie.

He gained a commercial pilot's license after learning to fly in the 1990s. In 2012 he set up Cardiff Aviation, an aircraft maintenance company.