IRON MAIDEN frontman Bruce Dickinson will read from his forthcoming autobiography, "What Does This Button Do?", talk about the experience of writing it and answer questions from the audience at half a dozen U.S. appearances in late October and early November:

Dey Street Books (formerly It Books), an imprint of HarperCollins Publishers, will publish "What Does This Button Do?" in the U.S. on October 31.

Heavy metal pioneers since their formation in 1975, IRON MAIDEN have sold over ninety million albums and played over two thousand shows in sixty-three countries, making them one of the most successful and globally influential bands of all time. One of the world's most storied musicians, Dickinson has been the band's internationally acclaimed lead singer for more than thirty years, and quite aside from the decades spent delivering high-octane performances with his larger-than-life persona, Bruce has lived an extraordinary off-stage existence too. A true polymath, Bruce is, or has been, an airline pilot and captain, an aviation entrepreneur, a beer brewer, motivational speaker, film scriptwriter, twice-published novelist, radio presenter, TV actor and a world-class fencer.

Over the last couple of years, and throughout MAIDEN's "The Book Of Souls" world tour, which has covered thirty-nine countries and one hundred and seventeen shows since February 2016, Bruce has turned his unbridled creativity to writing his memoirs, longhand (in seven A4 notebooks no less).

In "What Does This Button Do?", Bruce (a man who famously never gives interviews about his personal life) shares, for the first time, the most fascinating recollections, including his thirty years with MAIDEN, the early days, his childhood within the eccentric British school system, going solo, realising his dream of flying jumbo jets and his recent battle with tongue cancer. Dickinson is so much more than the frontman of one of the biggest bands on the planet. A rock icon, a true renaissance man, Bruce has been, and remains, a man of legend.

Bold, honest, intelligent and very entertaining, "What Does This Button Do?" is the long-awaited window into the life, heart and mind of one of our most adventurous and multifaceted sons. The global publication on October 19 will be accompanied with a commensurate international book tour. More details to come soon.

Bruce said: "It was flattering to be approached to write a book about my experiences and it seems an appropriate time to do this."

Fogg said: "There's no one like Bruce. Which other rock musician can fly a 747, or fence at an international level? He's a total one-off; engaging, funny, warm, self-deprecating — a British eccentric in its very best form. His book will be outstanding and I am so delighted we get to publish it and work with him."

Oswald said: "Bruce Dickinson might quite literally be the world's most interesting man. He's a true Renaissance man, and being one of the greatest rock singers of all time is merely the beginning. His memoir, like his voice, is sure to set a new gold standard and we're thrilled to be working with him on it."

Anette Ekström, MD HarperCollins Nordic, said: "We are so very pleased to be the publishing house for this exciting book! The Nordic countries have a steady fan base for heavy metal, and IRON MAIDEN in particular. Our aim is to publish the memoir in all four Nordic languages, as close to the English release as possible as we understand the fans will be anxious for it."

The first print-run of the U.K. hardback will have black sprayed-edges and will be available to pre-order ahead of publication. 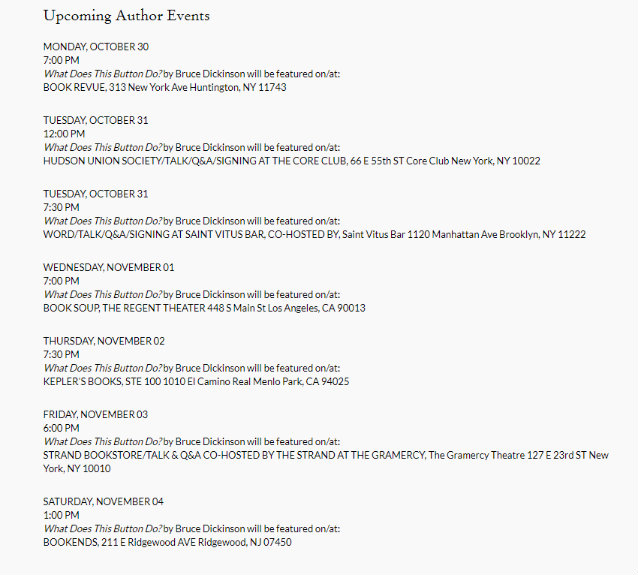