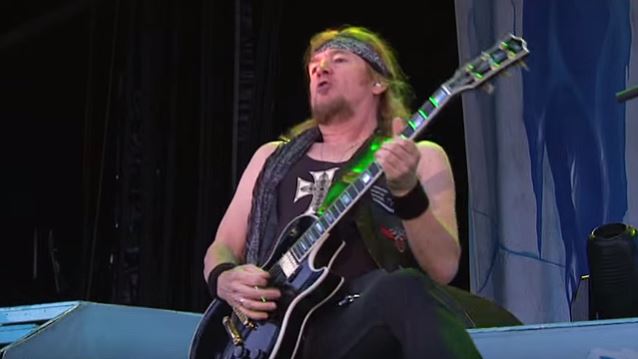 In a brand new interview with U.K.'s Total Guitar magazine, IRON MAIDEN guitarist Adrian Smith was asked if the fact that there are five songwriters in the band means that the art of compromise is a constant challenge for MAIDEN. He responded: "I think it's got a little more democratic. Having said that, a band is always a compromise, but sometimes it can be good. Back in the '80s, Steve [Harris, IRON MAIDEN bassist] would bring in four or five top-to-bottom finished songs, but now he's more interested in producing, arranging, lyrics and melodies. He'll ask me what ideas I've got and I'll usually have pretty well-formed ideas. He gets me to play my ideas to him and he'll come out with a melody straight away. He'll sing the melody over the top and he'll record it. Then, down the line, he'll sort through it. But he'll say the first thing that occurs to him is usually the best, and he's got a lot of ideas for lyrics, so we've done that quite a bit over the years. Well, I say over the years, in my second stint in the band — in the last 10 or 15 years, that's the way it works."

He continued: "[On IRON MAIDEN's latest album, 'The Book Of Souls'], I did a couple of things with Bruce [Dickinson, vocals], too. I thought I'd try writing shorter songs, like '2 Minutes To Midnight' and 'Can I Play With Madness', with just Bruce and me. We haven't done that since I've been back in the band. Maybe with 'Wickerman', we did it. So that was different. He came over before we started recording and we wrote 'Speed Of Light' and 'Death Or Glory'."

Asked how MAIDEN manages to push the band into new areas, while still satisfying people's expectations of MAIDEN, Adrian said: "Well, Steve constantly surprises me. I think the first time was when we did a song called 'Wasted Years' [written by Adrian for 1986's 'Somewhere In Time' album]. I was messing around with a little four-track and I'd just put that riff down for 'Wasted Years'. I was playing Steve some other stuff and I played it to him by accident and he said, 'What's that?' I said, 'You probably won't like this as it's so commercial,' but he really liked it and insisted we do it. So something you'd think he wouldn't want to do, he does. But I do like to sit down and visualize us doing different things. Obviously, we can't do anything too drastic, but whatever works, really."