British heavy metal legends IRON MAIDEN will make their highly anticipated first-ever visit to China in April on "The Book Of Souls" world tour, playing at Beijing LeSports Center on April 24 and Shanghai Mercedes-Benz Arena on April 26. Tickets go on sale from 2 p.m. on January 19 through ticketing hotline 400-610-3721, and online via Damai.cn.

IRON MAIDEN's latest album, "The Book Of Souls", debuted at No. 4 on The Billboard 200, having shifted 75,000 equivalent album units in the week ending September 10, 2015. That equals MAIDEN's highest rank ever, first achieved with 2010's "The Final Frontier".

In terms of pure album sales, "The Book Of Souls" landed at No. 3 on the Top Album Sales chart with first-week sales of 74,000 copies. This marked MAIDEN's best sales week since Nielsen Music started tracking sales in 1991.

Released globally on September 4, 2015 through Parlophone Records (Sanctuary Copyrights/BMG in the U.S.), "The Book Of Souls" was recorded in Paris, France with producer Kevin "Caveman" Shirley in late 2014, with the finishing touches added last year.

IRON MAIDEN announced in May 2015 that touring plans to support the album wouldn't happen until 2016 to allow singer Bruce Dickinson time to fully recuperate after his successful cancer treatment. 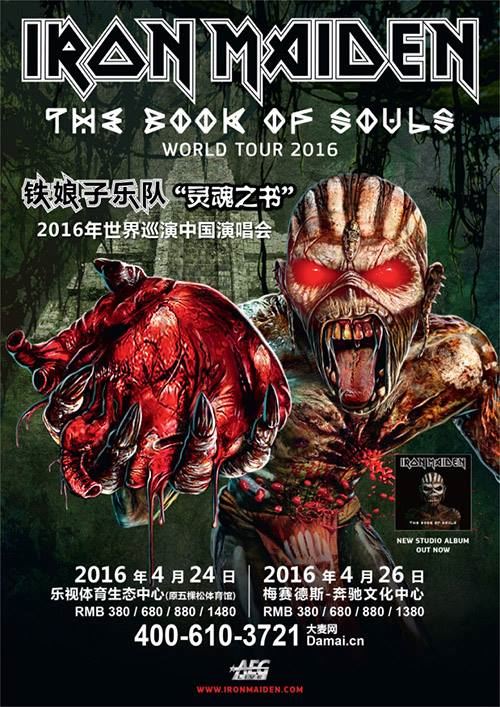