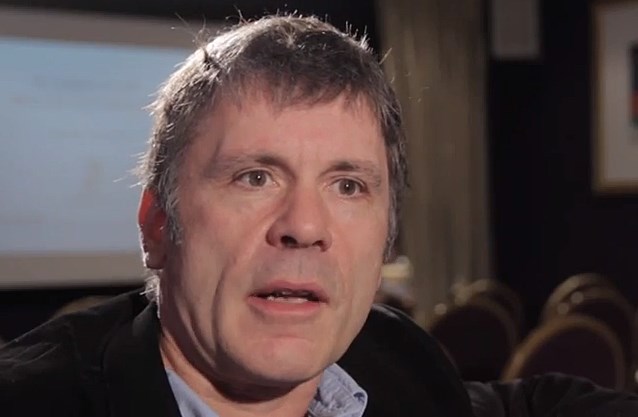 IRON MAIDEN singer Bruce Dickinson has denied being involved in an airship venture to manufacture drones with a contract to supply the U.S. Army.

The blog Dorset Eye published an article titled "Bruce Dickinson: Rock'n'Roll Warmonger" in which the IRON MAIDEN frontman was called out for his "acceptance from the U.S. military of a contract to manufacture 'lighter-than-air' drones. The contract is believed to be worth anything up to $500,000,000, according to Conference Speakers International."

In a written statement to NME.com, a spokesperson for IRON MAIDEN described the article as "spurious" and said: "This is a totally inaccurate and malicious piece of writing that seems to have stemmed from an unfortunate mistake in terminology on a South African website that the writer of said blog has since used as a starting point and catalyst to go off on a flight of sheer fantasy.

"Both Bruce Dickinson and IRON MAIDEN's manager Rod Smallwood were early investors in, and remain great supporters of, Hybrid Air Vehicles (HAV), a company that has nothing whatsoever to do with drones, 'lighter than air' or otherwise!"

The statement continued: "As with many far-sighted technological advances, early adopters and financial supporters tend to be military-based as they have the resources to invest and develop, be that everything from space-travel to medicine. Possible military use of HAVs in future could be for heavy-lifting, transportation or high altitude detection of IEDs (Improvised Explosive Devices), or similar, thus saving lives, both military and civilian.

"Rather than being involved in attacks in the Third World, as this writer has claimed in such an erroneously dramatic and defamatory manner, HAVs are designed to offer much needed assistance to civilians, businesses and governments that would be unavailable otherwise, due to the unique nature of these incredible vehicles."