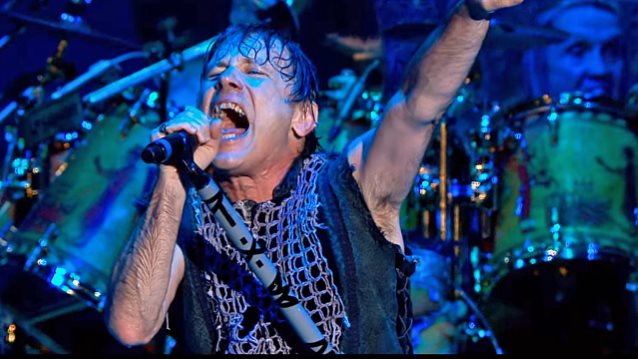 British heavy metal legends IRON MAIDEN have released an official performance video for the song "Death Or Glory", taken from their latest album, "The Book Of Souls". Check it out below.

IRON MAIDEN guitarist Dave Murray told Music Radar about the songwriting process for "The Book Of Souls": "On previous albums we've usually gone into a rehearsal room for maybe a couple of weeks and maybe have four or five songs under our belts. Then we'd go into the studio and start recording, and the rest of the material would be written while we were there. But this time we went in there with a blank page and a bunch of ideas.

"It was a really fun experience because it keeps you on your toes," he added. "You have to be really sharp. We're scribbling guitar chords down, melodies and harmonies, changes… basically we were flying by the seat of our pants because we never knew what was coming next. But it was wonderful how things kept flowing."

"This time I did a couple of things with Bruce too," Smith explained to Total Guitar. "I thought I'd try writing shorter songs, like 'Two Minutes To Midnight' and 'Can I Play With Madness', with just Bruce and I. We haven't done that since I've been back in the band [Smith rejoined MAIDEN with Dickinson in 1999]. Maybe with 'Wickerman' we did it [from 2000's 'Brave New World']. So that was different. He came over before we started recording and we wrote 'Speed Of Light' and 'Death Or Glory'."