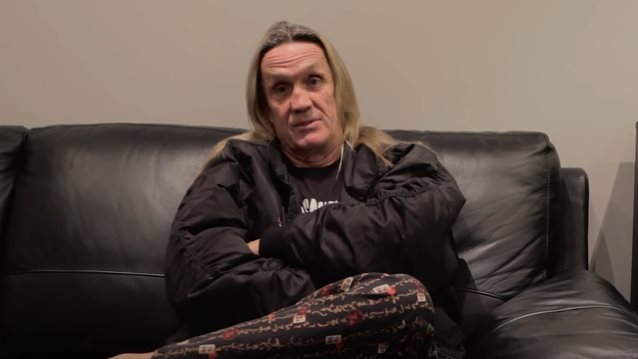 Australia's Maniacs TV last year conducted an interview with IRON MAIDEN drummer Nicko McBrain. The chat, which has just been posted on YouTube, can be viewed in two parts below.

Speaking about MAIDEN's devoted following, Nicko said: "Seeing so many of our fans out there… It is the MAIDEN army.

"I mean, every band in the world says their fans are the best, but I know for a fact that ours are truly the best fans in the world. And there's a passion and a love, and it's one big family."

He continued, addressing the fans directly: "I hope that you continue to love what we do as much as we love what we do. And this tour, I've gotta say thank you to you all, because without doubt, we're having the best time that I think we've ever had as a band touring, and playing these songs — these six songs that you probably know by now off the new record — and some old stuff… Old stuff… There's some old shit — thirty-five years old, some of these songs. And we really love this tour and what we do, and you make it all very, very special for us to get up there every night and play these songs for you."

IRON MAIDEN's hugely successful "The Book Of Souls" world tour will return to North America for an extensive series of arena and amphitheater shows in summer 2017. The mammoth tour opened in Florida in February 2016, playing fourteen sold-out shows in the U.S.A and Canada along with a further 58 concerts in 34 other countries around the globe.

Support on the trek will come from GHOST. There will also be some further bands added to the show at San Bernardino.