British heavy metal legends IRON MAIDEN have released an 8-bit video game based on the promotional clip for their new single, "Speed Of Light". Fans can play the role of MAIDEN's mascot Eddie in the "Speed Of Light" browser-based video game, available at the band's web site.

The "Speed Of Light" video was produced and directed by Llexi Leon with animation and visual effects by The Brewery Production Company. This is the first music video for Llexi Leon, who is said to be a huge IRON MAIDEN fan. Creator of the cult comic book series Eternal Descent — an IP that digitally animated a cast list of metal and hard rock luminaries — Leon has further expanded into the video gaming industry. He chose to collaborate with The Brewery whoss previous film credits include 2010's punk-rock inspired "Sex & Drugs & Rock & Roll" with Andy Serkis, 2012's music festival-themed "Spike Island" with Emilia Clarke, and more recently were providing VFX for the Sky Atlantic biopic on Ian Fleming.

The video is a "homage" to four decades of video gaming juxta-posed alongside IRON MAIDEN's 40 years of incredible visual canon centering on their talisman Eddie as he travels through space and time to complete his Herculean task.

"I pitched this idea to [IRON MAIDEN manager] Rod Smallwood and the guys in the band. They loved the concept and asked if I could pull it off. I figured it was IRON MAIDEN, so I had to pull it off — and it had to be the best thing I've ever done."

He continued: "The video is littered with nods to IRON MAIDEN artwork — whether it's the poses of the characters at certain key moments, or imagery woven into the background art. There's a lot to look out for in the video."

Due on September 4, through BMG in the U.S.A. (Parlophone Records in the rest of world), IRON MAIDEN's new album, "The Book Of Souls", was recorded in Paris, France with producer Kevin "Caveman" Shirley in late 2014, with the finishing touches added earlier this year. However, the band decided to delay its release so that singer Bruce Dickinson, who was recently given the all-clear from the tumor, would have time to recuperate sufficiently to join in the preparations for the album's launch. 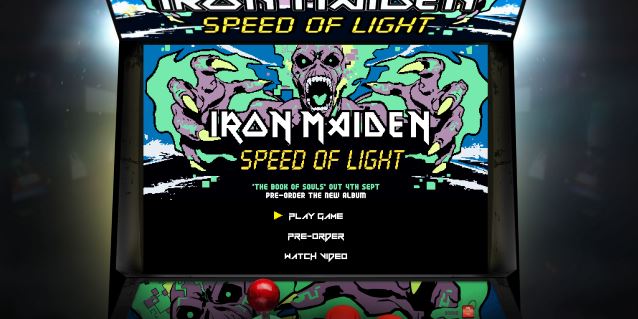