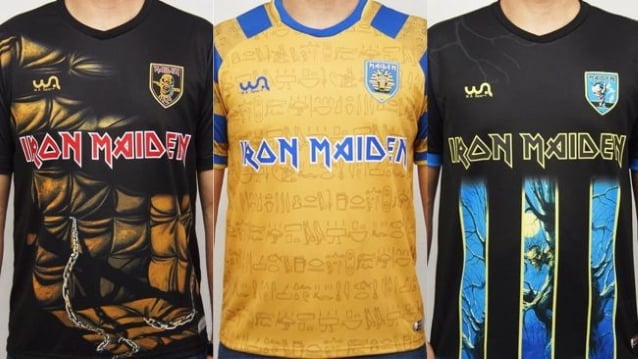 According to Footy Headlines, British heavy metal legends IRON MAIDEN have teamed up with Brazilian brand WA Sport for three soccer shirt designs, based around the covers of the MAIDEN albums "Piece Of Mind" (1983), "Powerslave" (1984) and "Fear Of The Dark" (1992).

Last November, IRON MAIDEN teamed up with the English professional football club West Ham United for the "Die With Your Boots On" collaboration. Named after the 1983 song of the same name and driven by die-hard West Ham fan and founder member of the band Steve Harris, this partnership brought together two institutions with shared origins in London's East End.

Harris, an avid soccer fan, said in a 2012 interview that he had given up playing the sport — for the most part. He explained at the time: "I've had so many problems with my back that I can only play the odd match here or there. Unfortunately, it's five years since I've played a full season of football and that's something that I miss a lot. But I had to make a decision. I play a lot of tennis."