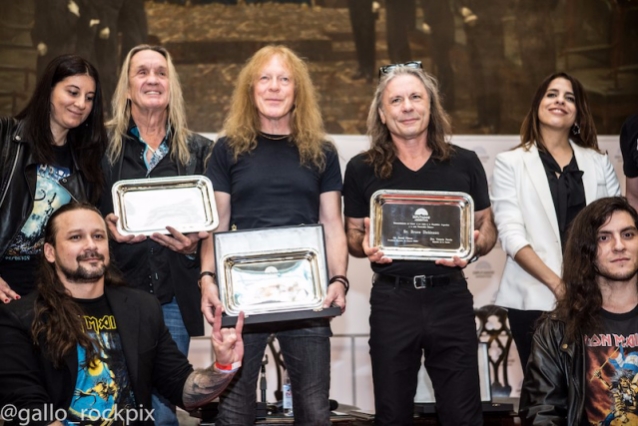 IRON MAIDEN was invited to attend the Congress of the Argentine Nation located in Buenos Aires this week, prior to the band's sold-out concert at the Velez Sarsfield Stadium. The British heavy metal legends were formally honored as Visitors Of The Nation and Chamber of Deputies of Argentina, a highly prestigious distinction granted to an international artist for the first time. The ceremony took place at the Salon De Los Pasos Perdidos on Friday, October 11, where the MAIDEN members were presented with plaques.

The motion was proposed and passed by the Chamber of Deputies of the Argentinian Congress earlier this year in recognition of the cultural and musical influence of the band and their music on the people of Argentina.

MAIDEN has sold over a million records in Argentina to date and has been bringing its live shows to Buenos Aires since 1992's "Fear Of The Dark", playing to tens of thousands of fans at every concert. Last week's performance mark MAIDEN's 11th visit to the country.