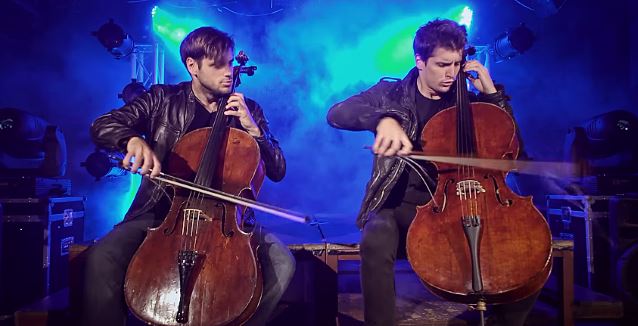 Luka Sulic and Stjepan Hauser, the Croatian cello duo known as 2CELLOS, have released a music video for "The Trooper (Overture)", a mashup of IRON MAIDEN's hit "The Trooper" and Gioachino Rossini's William Tell overture. In the clip, which can be seen below. the 2CELLOS star as two classical music-loving nerds who imagine themselves transformed into crowd surfing rock stars after seeing an ad for "Want To Be A Rock Star?"

Sulic and Hauser of the 2CELLOS are best known for re-imagining pop and rock tunes performed on their cellos. The Croatian duo toured in Europe extensively over the summer and has upcoming tours in Russia, Australia and the U.S. Their third studio album will be released in early 2015. They have released two albums — "2Cellos" and "In2ition" — which are available on Sony Music Masterworks. They were the first instrumentalists to ever be featured on "Glee" and have also appeared on "The Ellen DeGeneres Show", "The Tonight Show" and others. They were most recently featured in "The Bachelor" live wedding special.

In a recent interview with Thorium, Eicca Toppinen of Finnish cello rockers APOCALYPTICA stated about 2CELLOS: "That's kind of funny. These guys, they are talented and everything, but what has been funny also for me is to see that they are treated like they invented something. It's, like, 'c'mon, we did this 20 or 30 years ago. Where's the beef? You know. [Laughs] But I don't know why they became so big. Maybe because the time different, and there's YouTube…" APOCALYPTICA's Mikko Sirén added: "Elton John did a lot for them. I think they were supporting him. And they are great. They are talented musicians. Hats off to them." Toppinen continued: "Yeah, they are very good. No bad word about them. I think more it's funny for the media and for the people. But maybe [because we live in this] Internet time and YouTube time, [where] things spread so massively fast. It's so different than [it was] at the end of the '90s. You might get a video on MTV, in night rotation, [like] we did, but still, it's marginal [compared to the way it is today]"

He continued: "I saw the [2CELLOS] video. I checked it [out] — because of the social media, these kinds of video clips, they are spread, like, in one second. Everybody is sharing it: 'Oh, this is so great. This is so great.' And I checked the video, and I was, like, 'Ahhh…' This is, like, still working on the really old-school stereotypical thinking that having this baroque style of concert audience, and then, 'We're doing something really heavy.' [Laughs] But it's great. It's a lot of fun."