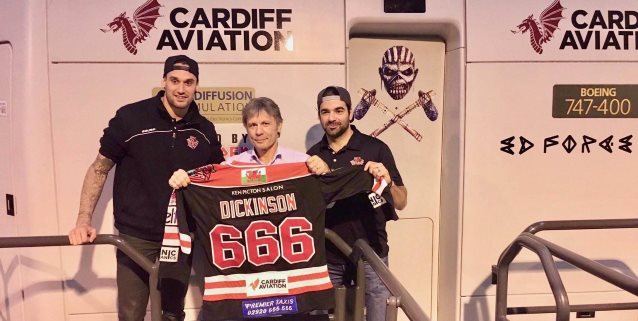 IRON MAIDEN frontman Bruce Dickinson showed off his other career as a pilot on Thursday, October 20 with Patrick Bordeleau and Sean Bentivoglio of the Cardiff Devils Welsh ice hockey team. Dickinson, who was presented with a Devils jersey emblazoned with his name and the number 666, is the majority owner of Cardiff Aviation based up at Cardiff Airport in Cardiff, Wales, United Kingdom and offering flight training with three flight simulators.

"It was so realistic; the inside of the simulator is exactly like the inside of a real cockpit," said Bordeleau. "We were belted in and got to experience what it is like to fly a 737.

"It was nerve wracking. You feel real turbulence and I was stressed out trying to land. I didn't do so well the first time, but I think I was smoother on the second try."

A full interview with Bruce courtesy of Icetime TV — including where he confirms he will be dropping the puck at the November 20 Devils game — can be seen below.

"It was an amazing day, and Bruce was awesome," added Bentivoglio. "We thought we would meet him and do a photo, not spend nearly three hours in a simulator with him. It is just like flying, the turbulence, the G-Force; it is intense. He had to take over when I missed the runway, but we brought the plane back around and I landed it safely."