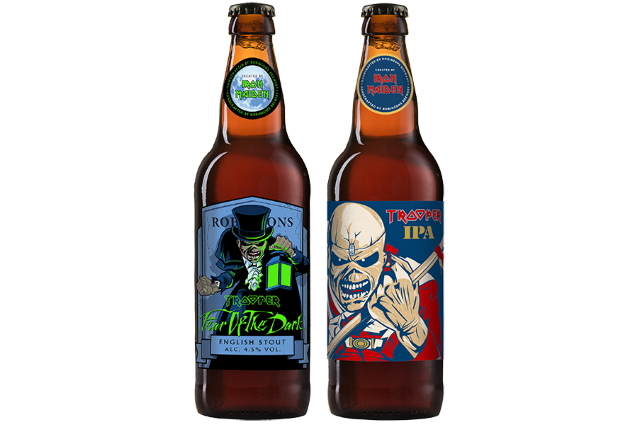 IRON MAIDEN and Robinsons Brewery have announced two new beers in the award-winning Trooper range; Fear Of The Dark, a 4.5% ABV English Stout, and Trooper IPA, a 4.3% ABV India Pale Ale. Both beers will be available to pre-order directly through the Robinsons Brewery web site, with Amazon orders opening shortly after. Further details on availability will follow.

The beers, which have been once again developed by IRON MAIDEN frontman and real ale enthusiast Bruce Dickinson and Robinsons' head brewer Martyn Weeks, are the seventh and eighth beers in the award-winning Trooper family. They represent the first IPA and Stout in the range, which has sold over 25 million pints worldwide since Trooper was first launched in 2013.

Weeks said: "Trooper is close to seven years old and has exceeded all expectations for us as a brewery. These two new brews join an extensive lineup of beers that we have created in our collaboration with Bruce Dickinson and IRON MAIDEN. These are two new styles that we are proud to champion."

Trooper IPA was inspired by American IPAs sampled by Bruce at the Craft Brewers Conference in Denver in 2019, where he was keynote speaker.

Dickinson commented: "I've sampled so many different styles of beer around the world on my travels with MAIDEN and it's hard to ignore how big IPA has become, and what an exciting style it can be. I'm a huge fan of both IPA and Stout and they were the gaping holes in the Trooper range. I've lost count of the number of people who have asked us to do a Fear Of The Dark Stout over the last few years!"

"An IPA is something we've always wanted to do with Trooper but had to wait until the timing and recipe were right," added Martyn. "We are extremely proud of this brew which marries together familiar American hoppy flavours with a fundamentally British backbone."

Along with Trooper IPA, Trooper Fear Of The Dark has been created, providing the first stout of the Trooper range.

Trooper brand manager Sam Kennerley said: "Fear Of The Dark is something fans have been begging for since Trooper was first released and we're proud to finally be rewarding their loyalty. Trooper Red 'N' Black porter was one of our most popular releases so we knew there was a demand for new darker beers and we are glad to be finally releasing a sessionable stout for all our fans to enjoy."

Rather than simply referencing the art of IRON MAIDEN's 1992 album of the same name, the Fear Of The Dark label shows ever-present band mascot Eddie paying tribute to Dickinson's onstage appearance when he performs the fan favorite on the current "Legacy Of The Beast" world tour.

Closing, Martyn said: "These two new brews represent the next steps in the evolution of the Trooper beer collection. We can't wait for fans old and new to try them!".

Trooper Fear Of The Dark and Trooper IPA are now available to preorder. They will both be available on Amazon.co.uk in the near future.