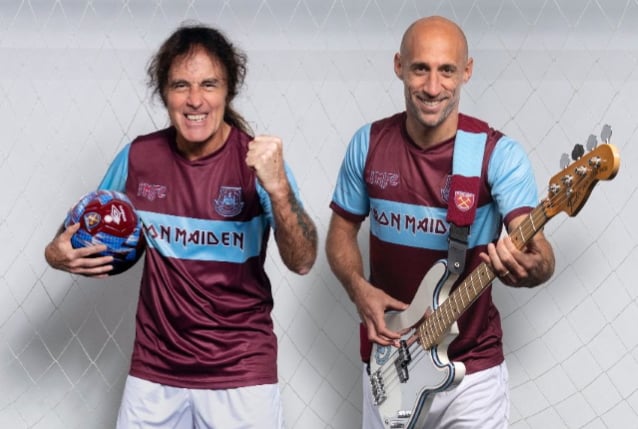 "Die With Your Boots On" is the name of a unique collaboration between IRON MAIDEN and the English professional football club West Ham United. Named after the 1983 song of the same name and driven by die-hard West Ham fan and founder member of the band Steve Harris, this partnership brings together two institutions with shared origins in London's East End.

Harris has been flying the flag for West Ham on stage for decades, with his bass guitar even featuring the club's iconic logo. His love for the Hammers goes back to 1965, as he recollects: "I went to see West Ham play against Newcastle when I was 9 and my mate was 10. We jumped on a bus and went to the game, and they won 4-3 and that was it. I was hooked!"

Many MAIDEN fans around the world have embraced Harris's passion for West Ham and taken up support for the club themselves, often appearing at concerts in Hammers apparel. Steve adds: "When I'm up there playing and I see fans in the audience wearing West Ham stuff, it gives me goosebumps."

Tracey Stratton, licensing manager at West Ham, was aware of the phenomenon. "One weekend last summer, our club shop was inundated with rock fans from all across the globe, and we realized that IRON MAIDEN were playing two sold-out shows at the O2," Tracey says. "It makes perfect sense to launch this collaboration, and with Steve's passion for it and attention to detail, it has been amazing."

Harris is very proud of the tie up with West Ham and was deeply involved in the design process, commenting: "I think it's brilliant. I really love that version and colour of the crest, and that old classic kind of kit. It's a modern shape but with a retro design, and I like that. Up the Irons!"

A full home kit will be available to fans around the world, who can now show their love for both institutions with one unique homage to the Irons. Steve launched the kit with West Ham and Argentina defender Pablo Zabaleta, who added: "IRON MAIDEN are a huge icon back home in South America and it's great for fans of West Ham and the band to be able to show their support for both."

The kit is available to order now from maiden.store/whu and www.officialwesthamstore.com. A limited number of shirts will also be made available in the West Ham store at the London Stadium upon release. 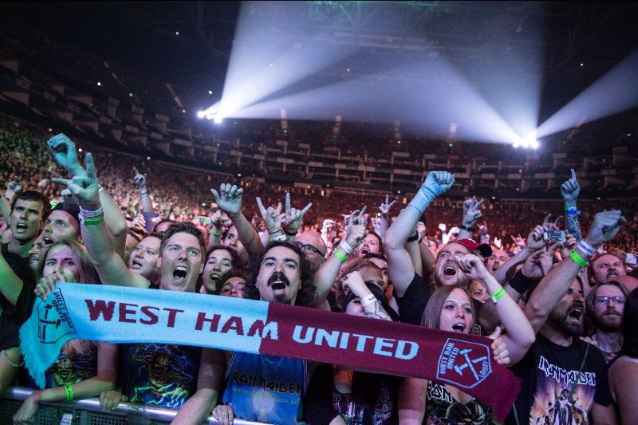