Created by Los Angeles-based photographer Strati Hovartos, this book gives fans an inside view of the fearless, behind-the-scenes look at the art, the rebellion and the grit that, in all of its glory… is Mayhem! As the official tour photographer, Strati's body of work has documented the festival since its inception. Striking and bold, his images have captured epic performances of metal greats, such as ROB ZOMBIE, SLAYER, SLIPKNOT, KORN and AVENGED SEVENFOLD. With the turn of every page, your mind will be dominated and transported to the timelessness of the Rockstar Energy Drink Mayhem Festival.

"Mayhem: 2008-2013" started out as a solo project that eventually evolved into a collaboration of some of the industry's most talented photographers. Inspired by the unique perspectives and signature styles of such photographic greats such as Shawn Crahan (a.k.a. Clown of SLIPKNOT), Scott Uchida, Rob Fenn, Rudy De Donker, Lisa Johnson, Dean Karr, Bobby Tongs, MACHINE HEAD's Robb Flynn and Justin Bauer, Strati was confident that the only way to fully project an all-encompassing and well-rounded view of the Mayhem experience was to include their work of riveting images alongside his.

"I wanted to be able to create a book that was a thorough look at Mayhem, and I felt my vision was limited to my perspective," said Hovartos. "So I reached out to a few of my favorite photographers and asked them to be a part of it. Along with my photos, I believe this book captures what Mayhem has been and is a vision of what Mayhem will be in the future."

The result is collection of powerful, iconic and magnetic images capturing the true essence and spirit of Mayhem. Through their lens, you will feel the frenetic energy of the fans, be transported to memories of performances past, and be engulfed by the enthusiastic, rebellion and grit that IS Mayhem!

These pages pay tribute to breakthrough performances by young bands performing at the festivalthrough their journey to the main stage. 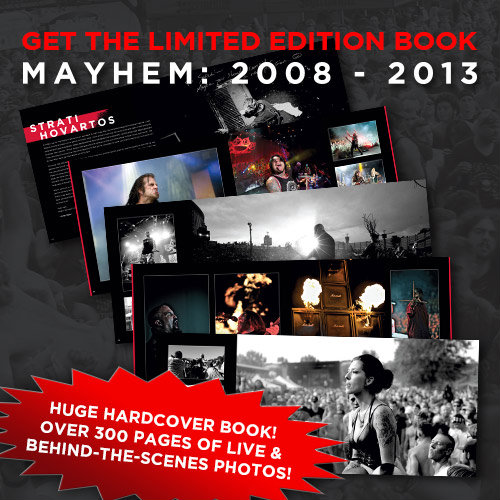