Canadian progressive metal titans INTO ETERNITY are in the midst of an extremely successful run as part of Summer Slaughter Canada, which also features NECROPHAGIST, DYING FETUS, BENEATH THE MASSACRE and WHITECHAPEL. This trek marked the kick off of their worldwide touring cycle for their much anticipated fifth full-length "The Incurable Tragedy", which is slated for a September 2 release in North America, Europe on August 25 and Japan on August 27. Look for the group to embark on a massive North American tour with the Matt Barlow-fronted ICED EARTH this fall.

INTO ETERNITY just posted the new track, "Time Immemorial", on the band's MySpace page, so head over now to check it out. The group recently shot a new video for the song with acclaimed director Craig Bernard (THEORY OF A DEADMAN). Expect the clip to premiere next month.

Commented bassist Troy Bleich, "This tour has just started and already the chaos has begun! We left Regina in a clusterfuck and managed to only leave behind one wallet and a Blackberry! We were lucky enough to realize this two hours in on our 37-hour death-trek to Montreal, but luckily, we're heading back that way in a few days, so we'll be up to full power in no time.

"We ended up making it to Montreal just in time for our video shoot for 'Time Immemorial'. The location was awesome, as it was apparently a haunted house. Didn't see any ghosts, though. That would've been cool, as it might have filled in the 13 hours of time spent waiting for Stu's acting career to take flight! In all seriousness, it was a very cool experience and I think the video is going to be awesome. Thanks to the director Craig and the rest of the crew for making it a time that was truly... immemorial.

"After that, we headed off to the first show of the Summer Slaughter Tour in Quebec City. Regardless of the insanity of nine different bands with too much gear, the show went off without a hitch and I think everyone had a killer time. Thanks to all our fans that came out and showed support! It's already apparent that all the bands are wicked cool and that this will be a killer tour. We're looking forward to the rest of the shows."

"The Incurable Tragedy" is the first INTO ETERNITY album to feature Justin Bender (guitar) and Steve Bolognese (drums), who came aboard shortly after the group finished Gigantour in 2006.

HardTimes.ca recently conducted an interview with founding guitarist/principal songwriter Tim Roth of INTO ETERNITY. Watch the 10-minute chat below. 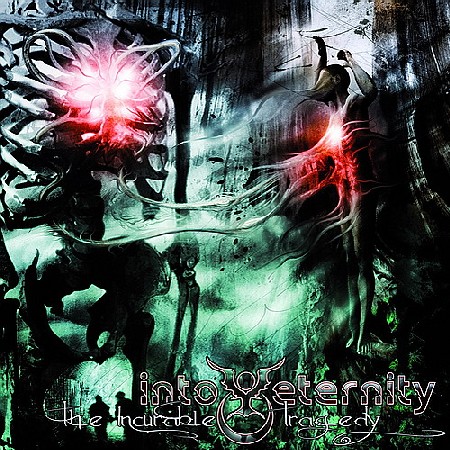