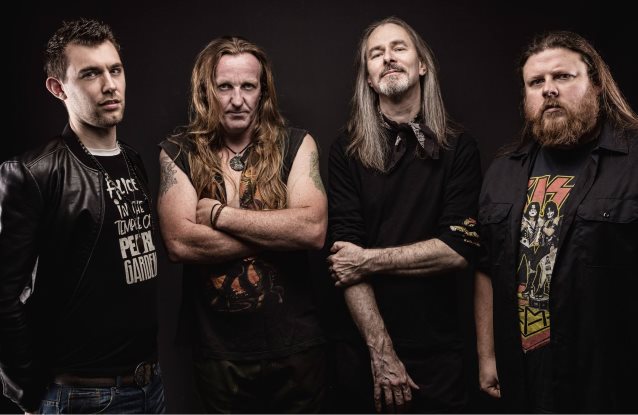 Classic NWOBHM outfit TRESPASS has released a new music video for the song "Momentum". A hard-rocking British metal song with an old-school '80s JUDAS PRIEST vibe, it is taken from TRESPASS's upcoming comeback album, "Footprints In The Rock", which will be released on January 12, 2018 via Mighty Music.

TRESPASS was formed in Sudbury, Suffolk, England in April 1979 by brothers Mark (guitar, vocals) and Paul Sutcliffe (drums), Dave Crawte (guitar) and Richard Penny (bass). Around this time, they started gigging around East Anglia, playing a mix of rock covers and original songs including early versions of "One Of These Days" and "Lightsmith".

Despite their fairly short-lived time on the metal scene, TRESPASS made a lasting impact. Lars Ulrich and James Hetfield of METALLICA remained fans since the very beginning and "One Of These Days" was featured on NWOBHM compilation "New Wave of British Heavy Metal '79 Revisited" put together by Ulrich and Geoff Barton in 1990.

TRESPASS played festivals in Europe in 2015 and 2016 and will be touring in 2018 in support of the upcoming album.