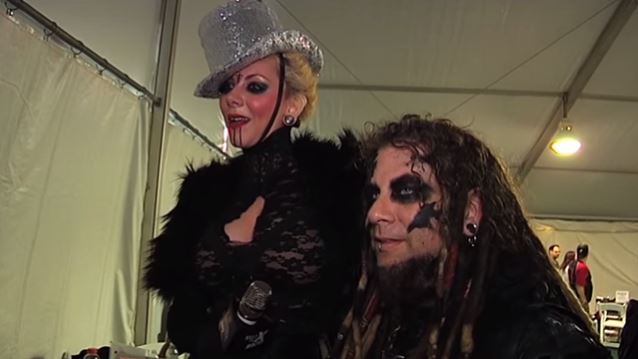 Nic and Big J of the Boise, Idaho radio station 100.3 The X Rocks conducted an interview with IN THIS MOMENT vocalist Maria Brink and guitarist Chris Howorth at this year's Rock On The Range, which is being held May 15-17 at MAPFRE Stadium (formerly Crew Stadium) in Columbus. You can now watch the chat below.

Speaking about what it was like being in the director's chair for IN THIS MOMENT's latest video, "Sex Metal Barbie", Maria said: "It was amazing. I co-directed the last two videos, 'Big Bad Wolf' and 'Sick Like Me'. But this one… It was a little scary [to do it] by myself. Chris helped me, though, a bit. It was exciting, though. I mean, it came out really well. I was nervous at first. When I first saw it back, I wasn't sure, and I called Chris panicking: 'Oh my God! I don't know.' But now I'm really happy with it, and it came out what we wanted it to be, which was this twisted, warped perception that other people have of us, kind of."

Added Chris: "Honestly, all of the… Even the videos before the last two that she co-directed, all the ideas and the weird stuff that you're seeing that's, like, making you feel uncomfortable, that's all her idea, usually, in the first place. So now it's just a matter of her taking it directly to the screen on her own."

"Sex Metal Barbie" is taken from IN THIS MOMENT's fifth album, "Black Widow", which sold 36,000 copies in the U.S. during its first week of release to debut at No. 8 on The Billboard 200 chart.

As previously reported, IN THIS MOMENT released "Rise Of The Blood Legion – Greatest Hits (Chapter 1)" on May 5 in celebration of their first decade of work.

The album includes material from their first four studio albums, including "Prayers", "The Promise", "Blood" and "Adrenalize". Material from "Black Widow" album does not appear.

In addition, the album comes with a DVD featuring some of their greatest video hits.

The band began a U.S. headlining tour on April 17 in Portland, Maine and continue through late May, with several festival stops along the way.