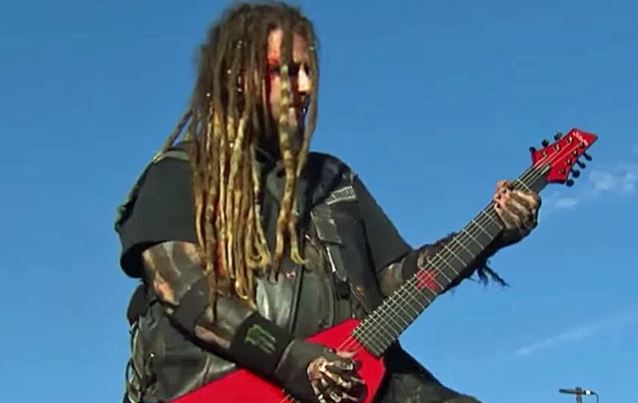 CrypticRock.com recently conducted an interview with IN THIS MOMENT guitarist Chris Howorth. A couple of excerpts from the chat follow below.

CrypticRock.com: Last we spoke, IN THIS MOMENT was in the midst of supporting the highly successful 2012 album "Blood". That album really turned a lot of heads and launched the band on to a higher level. Seeing that the band was essentially hanging by a thread prior to that record due to everything that happened, three years later now after its release, what do you think made "Blood" so successful?

Chris Howorth: That is a good question. I think it was a chain of events that lead to this moment that we could not predict, and it created a feeling in us to write "Blood". "Blood" is one of my favorite albums so far. It is one of the few albums where pretty much I love the whole thing and every song. I do not really have a good explanation of how it came about other than the fact that our backs were up against the wall and we had lost two members who were involved in the writing on previous albums. I love our previous albums, but this one was definitely different than that. I think the fact that Maria [Brink, vocals], Kevin Churko [producer] and myself did everything as far as the writing, arranging, and performing all the parts. We had complete control over "Blood" and it kind of created this different sound. We felt no fear, and I guess that just made it happen.

CrypticRock.com: What was the writing process like this time around for "Black Widow"?

Chris Howorth: We tried to mimic the magic of "Blood". We did not bring in any outside people, we did the same kind of formula. The only thing we were trying to do is keep that same sound and style, but pushed boundaries; I think we did that. It is really hard to follow up a record like "Blood". In your mind as an artist, every record you make is going to be your best record, it is better than the one before. If you are thinking like that, then your mind is not in the game. You do it and see where the chips fall. It is its own entity. Once you get to the studio, it is hard to describe. You start working in the studio and the songs start coming together one after the other and the record becomes its own entity. We are not a band that is going to scrap all of our songs and start over if we feel like we are not on the right track. It becomes what it becomes, and that's how it has been for every one of our records.

CrypticRock.com: Now, one of the boldest things about IN THIS MOMENT, you guys have stayed constantly on the road. It seems like you have been on the road now for three or four straight years; it really is quite amazing. While one can imagine the exhilaration performing live before packed crowds night after night is great, it has to be wearing as well. Has the lengthy touring schedule been wearing on yourself?

Chris Howorth: It absolutely has, and I do not mean that to sound like I am coming from an ungrateful perspective. We are so grateful to tour, and for this to be our job. You go out there, and if you are headlining, you are playing for an hour and a half a day, maybe working three or four hours a day, and three or four hours is a really busy day. The whole rest of the day is waiting and trying to figure out what to do, missing your family, and being bored.That is the thing, too, with this business — unless you are METALLICA, you cannot take a long time to do records. You have to do a record, and when you feel that the time is right, interest is waning, and the interviews are not coming in, you kind of just know it is time. You go do another record, and the only time you are not touring is when you are making that record. You get done with the record, you start thinking about the tour, what are we going to do, how are we going to push this, how are we going to promote it, where are we going to play, what is our show going to be like? It is a never-ending thing. I just dream about the day when we can actually take a break for real and not even know when you are going to do the next album, until you feel the time is right. The way things are now, and [the way it is for] most bands, there is no extended break. You just have to keep the hammer down, keep pumping out new music, and playing shows so people know you are there.

Read the entire interview at CrypticRock.com.