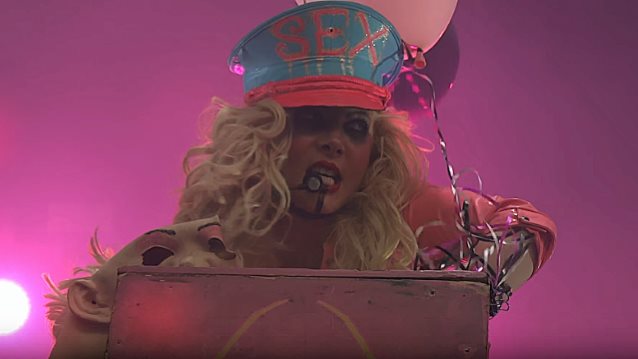 IN THIS MOMENT has apparently set "Ritual" as the title of its new album, tentatively due on July 14. The cover artwork for the follow-up to 2014's "Black Widow" was released earlier today via the band's social-media channels and can be seen below.

The first single from "Ritual", a song called "Oh Lord", was premiered yesterday (May 10) on SiriusXM's Octane.

IN THIS MOMENT frontwoman Maria Brink told Albany, New York's Q103 radio station about the lyrical themes covered on the new album: "I've always been a woman that's about empowering people and empowering women, and I've been very free with… I've been very free with my sexuality, I guess you should say, as far as just, like, just out there, and I wanted to show people, and definitely women, a different side of strength in me that was a really powerful force within me that didn't need the sexual part. So there's definitely a more serious overtone, a lot more just fire and very… I think people are really gonna really like this side, this more serious, deeper side of us."

IN THIS MOMENT guitarist Chris Howorth recently told "The Cutting Edge Countdown" that "Ritual" is "different and cool and I think it's a different step for us but that I think our fans are really gonna like."

Howorth said about the new CD's direction: "Stylistically, I think we went a little bit more raw, you know — like, not so much campiness like 'Sex Metal Barbie'. Not that there was anything wrong with that — we're always trying to experiment and do something different — but it's more serious, I guess, and a little more stripped down."

IN THIS MOMENT has been performing two new songs on the current "Half God Half Devil" tour — the aforementioned "Oh Lord" and "River Of Fire".

The tour marks IN THIS MOMENT's first full-scale run since serving as special guests on last year's "Return Of The Dreads" trek with KORN and ROB ZOMBIE.

IN THIS MOMENT recently revealed its summer tour plans, confirming that it will stay on the road with MOTIONLESS IN WHITE, along with VIMIC and LITTLE MISS NASTY, in June, through July and into August. STARSET will appear on a handful of dates. Additionally, IN THIS MOMENT will support AVENGED SEVENFOLD on June 19 and PAPA ROACH on June 23.

We welcome you to Ritual... coming soon . pic.twitter.com/bHXChMeJct