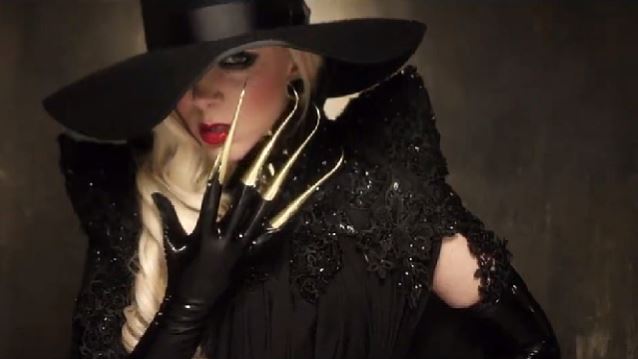 A teaser for "Sick Like Me", the new video from IN THIS MOMENT, can be seen below. The song is taken from the band's fifth studio album, titled "Black Widow", which will be released on November 17. The CD was once again helmed by Kevin Churko (OZZY OSBOURNE, FIVE FINGER DEATH PUNCH, HELLYEAH, PAPA ROACH) at his The Hideout Recording Studio in Las Vegas, Nevada.

"Sick Like Me" is making its way up the rock radio chart and singer Maria Brink gave The Pulse Of Radio a little insight into what the song is about. "That's kind of about embracing more of these things in me that I used to kind of keep 'em inside and they're a little bit twisted and they're a little bit wrong, I guess," she said. "And also, when you find another person who really, I guess, knows who you are and they find all of these things that maybe I would consider flaws in myself — they find that beautiful and like, I guess, things that make me who I am."

"'Black Widow' is definitely the darker part of me," said Brink. "This album is about finding the weakness inside and turning it into strength. It's about being reborn, setting yourself free and realizing the balance in everything — the dark and the light.

"We are very excited to be releasing this album through Atlantic Records," she added, "who have put out some of the greatest and most revered albums of all time. I am so ready and excited for the launch of this album. I think people will embrace its diversity and hearing different sides of us that they haven't experienced yet."

"Here we go again," said guitarist Chris Howorth. "This was by far the most challenging, exciting and rewarding experience we've ever had making a record. We threw out the rulebook and tried to create something fearless, constantly pushing ourselves to make an album unlike anyone has heard before. Fans, get ready for this ride — everything is going to the next level."