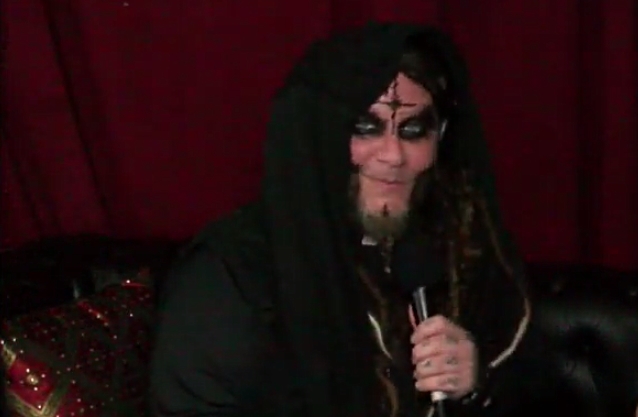 Ronni Hunter of the 99.7 The Blitz radio station conducted an interview with IN THIS MOMENT guitarist Chris Howorth at this year's Sonic Temple Art + Music Festival, which is being held May 17-19 in Columbus, Ohio. You can now watch the chat below. A couple of excerpts follow (transcribed by BLABBERMOUTH.NET).

On the title of IN THIS MOMENT's forthcoming album, "Mother":

Chris: "It's kind of an extension of [2017's] 'Ritual'. And the reason we thought of 'Mother'… It's a lot of different things, but a lot of the fans call Maria [Brink, IN THIS MOMENT singer] 'mom,' for one. They're always, like, 'Maria's my mom' and 'Mother Maria' and all this. That was always kind of there. We were actually even talking about it for the last album, but I felt like maybe we weren't ready for it yet. But it's also 'mother' in the sense of 'Mother Earth,' the creation of life — all these things that mother has such significance for. Mother is kind of connected to everything. So, in all that sense, it's really cool and it gives us a lot to pool from. And Maria's a mom; she was raised by her mom; everybody has a mom, in some sense. So, that whole concept is kind of what we were going for. With the extension of 'Ritual', the album before, and some of the imagery with that, the ritualistic, pagan kind of feel."

On the progress of the recording sessions for "Mother" and the album's musical direction:

Chris: "The album is done. We're doing the final notes on the mixes and stuff, and we're picking the song that's gonna be coming out first. We're still not sure. There's a lot of really good stuff on it. It's gonna be heavy. I think people are gonna really like that about it… I've been saying probably the heaviest since [2012's] 'Blood', 'cause 'Blood' was the last I felt, like, 'Wow! This is really heavy.'"

"Mother" is tentatively due in August. The disc was once again recorded at The Hideout Recording Studio in Las Vegas, Nevada with producer Kevin Churko.

IN THIS MOMENT has a number of shows scheduled through the rest of the year, including summer festival appearances in the U.S., dates with DISTURBED in September/October and a European tour in November.