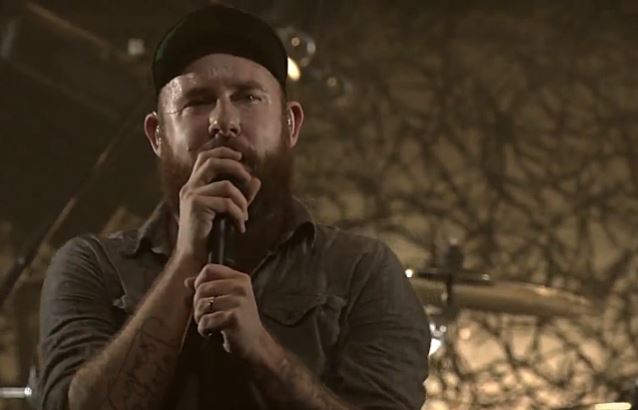 The Rave TV conducted an interview with vocalist Anders Fridén and guitarist Niclas Engelin of Swedish metallers IN FLAMES on March 18 in Milwaukee, Wisconsin. You can now watch the chat below.

Speaking about how different it is for young metal fans to check out new bands and albums today compared to how it was when the members of IN FLAMES were growing up, Niclas said: "I think the magic is gone somehow. Because when I was a kid, you had to search for [new bands and records]. And then you could see an ad. For example, [if] DIO was releasing a new album, 'The Last In Line'… Oh, it will be out during the fall. Then you went for the whole summer just waiting for it. And then you could some ads, you could see how it looked, the cover artwork. You were building up something. That's a little bit gone."

Added Anders: "I skipped school just to be there when [METALLICA] released '…And Justice For All'. It was so, so important. And you couldn't get it in advance. You might have heard some songs on the radio. Being Swedish, we didn't have that many radio shows anyway. At the same time, I must say, it's hard for us to get into the minds of the young people today. I mean, they have a different way. I mean, fuck, we started before the Internet [existed], which is pretty crazy to say. It doesn't say anything about our age, but… Nah, but it's… Kids today have a different way, and for them, that's their way."

He continued: "I remember I could go to record stores and stand there for hours and hours, with piles of vinyls and just listening through. I bought one [album], maybe two [albums at a time], if I was lucky. And it was such a great feeling going home with that vinyl, instead of today when everything is there; it's out there for anyone to grab. And also, what [Niclas] said, the magic is gone somehow… according to us."

IN FLAMES' latest album, "Siren Charms", sold around 9,000 copies in the United States in its first week of release to debut at position No. 26 on The Billboard 200 chart.

"Siren Charms" was released in the U.S. on September 9, 2014 via Sony/RED. The CD was recorded at Hansa Tonstudios (DAVID BOWIE, DEPECHE MODE, U2) in Berlin, Germany. The cover artwork was created by Blake Armstrong of Space Boy Comics.

IN FLAMES filmed a new concert DVD/Blu-ray on November 6, 2014 at Hovet in Stockholm and November 7, 2014 at Scandinavium in Gothenburg, Sweden.