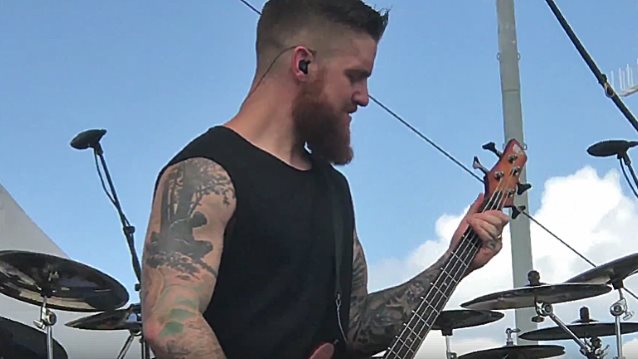 Swedish metallers IN FLAMES have recruited Bryce Paul — a member of the Southern California pop-rock outfit IVES — to play bass for the band on their current U.S. tour, which includes a number of headlining shows and festival appearances.

Fan-filmed video footage of Bryce performing with IN FLAMES on April 29 at the Fort Rock festival at JetBlue Park in Fort Myers, Florida can be seen below.

Longtime IN FLAMES bassist Peter Iwers quit the band in November saying that he was leaving IN FLAMES "to pursue other endeavors." His replacement for some of the recent European shows was Håkan Skoger, who had previously played with PASSENGER and GARDENIAN.

Asked by Metal Express Radio why Iwers chose to depart IN FLAMES after almost twenty years with the band, IN FLAMES guitarist Björn Gelotte said: "He's always been a very busy man, and I think he was just done with this life. He's still writing music, playing music with friends in different constellations. [Peter and I] have [a] bar together [in Gothenburg, Sweden], 2112, so he's busy doing that. He has a brewery together with the old drummer from IN FLAMES, Daniel [Svensson], so he's a very busy man."

According to Gelotte, Iwers first brought up the subject of leaving IN FLAMES before the band's fall 2016 tour with HELLYEAH. "We talked a little bit before the last U.S. run now, and that was, like, November 'till December some time," the guitarist recalled. "We talked a little bit beforehand, and I think he just made the decision early on on that tour.

"We're not 18 anymore," he added. "There's different priorities for different people, and it's just how it works. It's super sad — it's our brother — but then again, we have so much together that we do that I will talk and meet him all the time anyway."

"Battles", IN FLAMES' twelfth studio album, was released on November 11 via Nuclear Blast in all territories excluding North America and Scandinavia and Eleven Seven Music Group in the U.S.