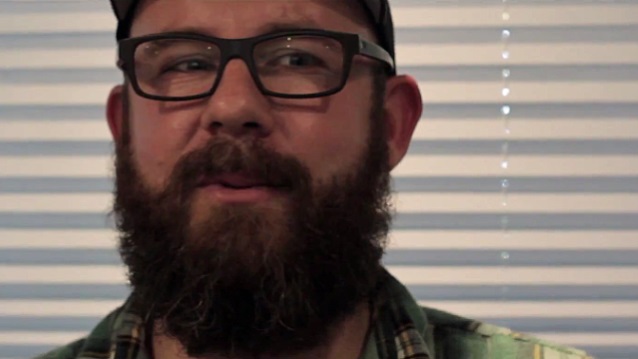 Rock Total TV recently conducted an interview vocalist Anders Fridén and drummer Daniel Svensson of Swedish metallers IN FLAMES. You can now watch the chat below. A couple of excerpts follow (transcribed by BLABBERMOUTH.NET).

On the difference in the IN FLAMES songwriting process since the departure of guitarist Jesper Strömblad:

Anders: "The difference since Jesper left isn't… I mean, musically, it's not that different, to be honest. We have the same approach as we always had. We're trying to write good melodies, and that's what we've done since the first album. Now we have a broader range, I think, sonically; we do melodies on guitars and in vocals and and guitar. But me and Björn [Gelotte, guitar] have been part of this band for ten albums, and we've been part of the songwriting as well. And Daniel and Peter [Iwers, bass] have been part of the band for, what… eight, nine… No, eight or seven albums… something like that. So we really know how to write IN FLAMES music. So, for us, it wasn't a big departure in that sense. I mean, we miss the guy as a friend, but we just couldn't really work together anymore. And I don't think he wanted to be in the band anymore, to be honest."

On IN FLAMES's musical evolution:

Anders: "I think with every IN FLAMES album, we change our sound slightly. It's not really intentional; things just happen. We don't sit around the table and discuss, 'Okay, let's do this direction. Now should go in this way.' It just happens there and then. We're not a band that writes on the road, really. That's maybe one reason that the albums sound slightly different. But, mainly, we just don't wanna do the same thing again and again. I mean, personally, I would like to challenge the listener a little bit — make them think and not be… almost like I wanna provoke them to a reaction, because they shouldn't know exactly what they're gonna get. Even though, again, we're just trying to write the best possible album and best possible melodies we can. I mean, right now 'Siren Charms' is the way we interpret IN FLAMES music in 2014. And I am quite sure the next album will sound different again. So, yeah, there you have it."

IN FLAMES' new album, "Siren Charms", sold around 9,000 copies in the United States in its first week of release to debut at position No. 26 on The Billboard 200 chart. Released in the U.S. on September 9 via Sony/RED, the CD was recorded at Hansa Tonstudios (DAVID BOWIE, DEPECHE MODE, U2) in Berlin, Germany. The cover artwork was created by Blake Armstrong of Space Boy Comics.