Jesper Strömblad (pictured below), guitarist and founding member of the Swedish metal band IN FLAMES, has been forced to sit out the group's upcoming tour of South America, Australia and Japan. Jesper has checked himself into a rehabilitation clinic in order to receive treatment for his alcohol addiction. On this tour, Niclas Engelin from the Swedish band ENGEL will fill in on guitar. Niclas has helped IN FLAMES on a couple of occasions in the past and is no stranger to the band's songs or the touring life.

Commented the group in a statement: "Jesper has struggled for some time with alcoholic abuse, and decided to sit this [tour] out in order to seek help and focus on rehabilitation and all that comes with it. We all talked about it and together with Jesper, we chose to ask our longtime friend Niclas Engelin, who helped us before, to complete the tour. We are all sad that it needed to come to this, but health comes first. This is something Jesper needed to do for himself and we wish Jesper all the best with his recovery and hope to have him back on the road with us again very, very soon!"

IN FLAMES was honored in the "Best Swedish Band", "Best Swedish Album" and "Best Swedish Live Band" categories at the Bandit Rock Awards. The awards ceremony, which was organized and hosted by the Stockholm-based radio station Bandit Rock 106.3, was held this past Friday (January 30) at Tyrol in the Swedish capital.

IN FLAMES took home the "Best Hard Rock" award at the Swedish "Grammis" gala, which was held on January 7 at Hovet in Stockholm. The band also performed the song "Alias" during the ceremony, which was broadcast live on Swedish national channel TV4.

IN FLAMES was presented with the award by Joey Tempest, singer for the reactivated Swedish hard rock band EUROPE.

The artists were nominated for their most recent releases, all of which came out during 2008. 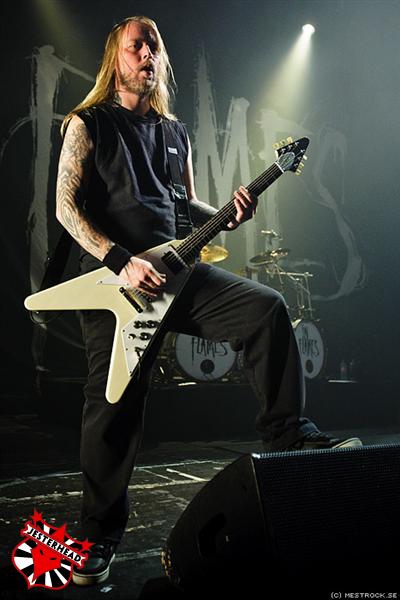