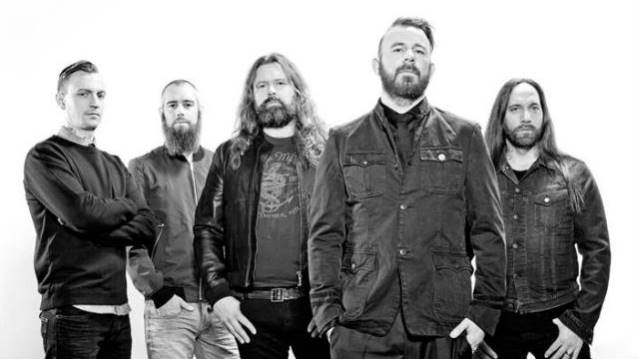 On June 25, Natalie Perez of Natalie's World conducted an interview with drummer Daniel Svensson of Swedish metallers IN FLAMES. You can now listen to the chat below.

IN FLAMES' eleventh album, "Siren Charms", will be released in the U.S. on September 9 via Sony/RED. The CD was recorded at Hansa Tonstudios (DAVID BOWIE, DEPECHE MODE, U2) in Berlin, Germany. The cover artwork was created by Blake Armstrong of Space Boy Comics and can be seen below.

On whether the recording process for the new IN FLAMES album was relatively "typical":

Anders: "I don't think we do any typical recording. Every album is slightly different, and this time was more different, because we sold the studio that we had in Gothenburg, so we had to go somewhere else. And the choice… what we picked was we went to Berlin and recorded at Hansa Tonstudios, which is a classic studio with a lot of history. I was there at the beginning of last year, and when I got home, I told the boys, 'This is the place where I wanna record the new album.' And they were all up for the idea.

"Last summer, the last show we did was Summer Breeze [festival in Germany]… We did another show in Stockholm, but the [last] official show we did was in Summer Breeze. And after that, we started writing pretty much immediately. We had a few weeks off, and then at the beginning of November, we entered the studio and recorded for six weeks. And it was hard, it was tough, because that was half the time that we had on the previous album. It was kind of intentional, because we wanted to see if the pressure could add something to the album. And we mixed the album in early January and here we are talking about it. I feel really good now that we have some distance and I'm super pleased with the result. It's a new step for IN FLAMES. People will find typical IN FLAMES, they will find something new. I think there's a little bit for everyone."

On whether IN FLAMES had a specific goal in mind for the new album:

Anders: "We don't have a master plan, to be honest. We just try to create the best possible album we can at the moment where we are in life at that point. So we never look at other bands or any genres and say, 'Oh, this is what we wanna do.' I mean, we went to Berlin for a reason, that studio, to see if we draw some energy from that studio. The pressure, especially from my end, it was… We had some ideas and structures and parts of songs, but the… The first two weeks, we put everything together, but I had nothing — I had no vocal melodies, no lyrics, no nothing. And I wanted to see if I could deliver under pressure and what that would do with me as a songwriter. So I had to draw inspiration from something, so I was watching a lot of documentaries about people in really bad situations, a lot of drug-related documentaries and so on. And from there, there's so much sadness and desperation, but there's hope as well, to get away from all the misery. There's love and there's hate, and I kind of used that. Then the title, 'Siren Charms', a siren is in Greek mythology; it's like a womanly creature who sings nice songs and lures sailors to the depths. And I used that kind of image to describe something in life that will charm you, and she has to symbolize the good and the evil part, so to speak. So it covers the whole album and all the theme of the album, if there's a theme. And all the different songs are around this topic. [They're] not very happy songs…. I think it has a sad tone or something. It was created under a lot of emotions and stress and inspiration as well, because of this time pressure, but it was supposed to be like that. I hated myself towards the end of the recording, because of this. I was, like, 'Why do you put yourself in this situation?' But at the end of the day, I'm happy I did and I got through to the other end."

On how "Rusted Nail" was chosen to be the first single from the new album:

Anders: "All the songs, for me, are great. And for the first time… 'Cause usually, I'm, like, 'OK, this is the single, this is the video, this is how everything should be and look and whatever.' And now, it was, 'I can't pick and choose. Record company, you decide.' And I guess they took 'Rusted Nail', because it shows where IN FLAMES are today, and it's a nice description of the album. It has a little bit of that and a little bit of this. To me, you could pick any song; I like them all."

On whether he considers "Siren Charms" to be a natural progression from 2011's "Sounds Of A Playground Fading":

Anders: "For me, yeah, sure. Every album is equally important. And if it wasn't for [1996's] 'The Jester Race', [2000's] 'Clayman' or 'Sounds Of A Playground Fading', there wouldn't be any 'Siren Charms'. So, for me, it's a natural progression. It's three years between this one and the last one, and this is where we are today. So, for me, it's totally natural. It might not be as natural for some other people, but that's their decision."